How are the Phillies doing on key stats compared to last year, and to the rest of the league. Also, Michael Young's hot start, and upcoming milestones for several Phillies. 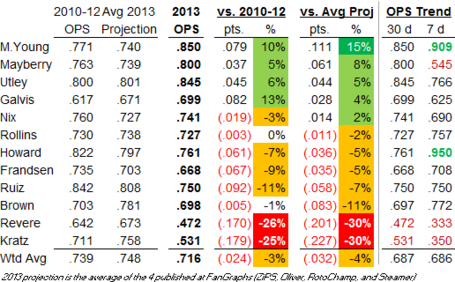 So it appears he's due for some regression, although the walk rate is encouraging. He's seeing fewer strikes, but he's also swinging less often at both balls and strikes.

(small sample caveats on all of the above)

The Phillies are doing their part to discredit batting average as a measure of a team's offense.

As recently as last season, the Sunday Philadelphia Inquirer included as a staple of baseball coverage a listing of most qualifying players in each league, ranking hitters by batting average and pitchers by ERA. It also included team rankings, sorted by ERA for pitching, and by batting average, of all things, for hitting, even though runs scored were also shown, almost as an afterthought. The format hadn't changed since I was a kid decades ago when those tables were the main source of MLB stats during the season, and poring over them was a Sunday morning ritual. It appears they've stopped printing those tables this year, which makes sense in the information age, but, flawed and quaint as they were, I have to admit I miss them a bit.

Also, Phillies pitching has the NL's 3rd lowest BABIP against, so their ERA could probably be even higher than it already is, given the same fielding, sequencing, etc.

Also, how bad does a pitching staff need to be to play half its games in Petco Park and still rank near the bottom in everything? 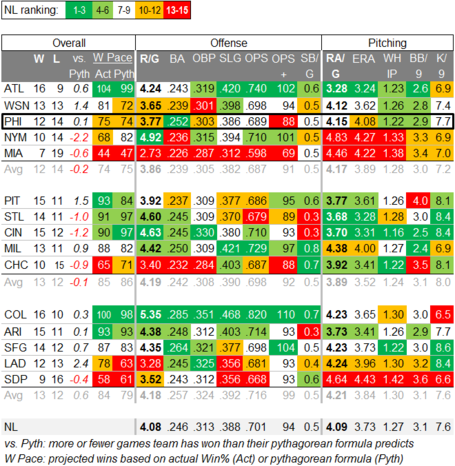 A more comprehensive post on Phils' milestones is coming soon, but in the meantime these are the milestones that could be reached in the next few games:

Jimmy Rollins
- His next home run (2nd this year), will be the 195th of his career, tying him with Bobby Abreu for 10th on the Phillies' all-time list.

Chase Utley
- Utley's next home run (5th) will tie him with Richie/Dick Allen for 8th in Phillies' history at 204.
- His next HBP (1st this year) will break a tie with Chet Lemon and move him into sole possession of 21st place in MLB history, with 152. A 2nd HBP will tie him with Fred Clarke for 20th.
- Also, his RBI double at Citi Field on Saturday tied him with Pat Burrell for 10th on the Phils' all-time list in extra base hits, at 518.

Ryan Howard
- Howard only has three walks so far so this may not happen very soon, but four more will tie him with Greg Luzinski for 11th in Phils' history at 572.

Charlie Manuel
- This is a week and a half away, but the Phillies' 36th game will tie Manuel with Gene Mauch for most games managing the Phillies, with 1,332.