The Mists of Avalon: The Phillies, Margaret Thatcher, and Apostate Red Phanatic

With the passing of a childhood idol - a woman whose image and persona led me sweetly into puberty as I clutched issues of The Economist in my sweaty hands - it is fitting to consider the present status of the Phillies and to wonder who will be the Phillies' Margaret Thatcher. I submit, vigorously, that it is Apostate Red Phanatic.

Share All sharing options for: The Mists of Avalon: The Phillies, Margaret Thatcher, and Apostate Red Phanatic

Margaret Thatcher died yesterday. She was far more complex than the caricatures often presented by her critics. Almost single-handedly at times, she compelled the United Kingdom to rise off its ass, retool, and reinvent itself. Her ultimate political victory is that her opponents in the Labor party essentially incorporated much of her agenda and market philosophy. Tony Blair during the 1990's was far to the right of most Tories in the 1970's.

The spirit Thatcher represented to me in my youth and today is one that we should consider as we ponder the future of the Phillies. She was a watershed persona, one that seems imbued with almost supernatural strength of character and force of will. Much of this is the narrative that society, media, and historians overlay on individual personalities, but engage in a flight of fancy with me here, folks. The Arthurian legends, dreams of Avalon, and the return of a King pervade the mists of history and culture of Wales and England. Alfred the Great, Arthur, and others are routinely interpreted through that prism, right up to men like Churchill during World War II.

I think all that is entirely wrong. The miraculous salvation of England is about the great women, not the great men. And the type of woman especially is key here.

Boudica led England in revolt against the Romans, fighting valiantly, but ultimately falling in the Midlands near Watling Street. Boudica, described as "tall [with] hair described as reddish-brown or tawny hanging below her waist, a harsh voice and a piercing glare" set the standard for strong, English women in history. Her Celtic heritage notwithstanding (she predated the Saxons, Normans, and she was not a Roman), she helped forge the notion of Englishness and resistance to invaders.

A Tudor, Elizabeth led England against the Spanish, when courage, fortune, and poor forecasting Providence enabled the defeat of the Armada. Elizabeth was a ginger, and she was utterly ruthless and effective, and she set the stage for English dominance and empire for countless years. Yes, a shrill, harsh ginger. Coincidence?

In 1979, at a critical moment in its history, playing a reduced role in world affairs and weakened by inflation, unemployment, strangling unions, and economic inefficiency, Margaret Thatcher wins an election, and takes the helm. The New York Times fairly and reasonably describes her leadership, and her rise and fall. While there is probably no modern figure whose legacy is more divisive than that of Thatcher, excepting possibly Reagan, she was a "good thing" for the United Kingdom, without a doubt. She also bore the signs of Boudica and Elizabeth.

At this point, you really can't dispute the scientific-y-ness of this whole female, red hair, and sort of shrill thing. At key moments in the history of western civilization, red-haired troublemakers respond to the clarion call to save the world, or at least the United Kingdom.

Which brings me, at long last, to the point. Apostate Red Phanatic.

Wet Luzinski, I hear you. I respect you, or at least I did. But you have read the whole thing wrong. Red Phanatic is here to save us all, and you, sir, are the enemy of progress and all that is good in the world. I believe in the Red Phanatic. In our hour of need, from the Mists of Avalon the Delaware, Apostate Red Phanatic has emerged, as John the Baptist, to announce the coming era of Phillies greatness and to lead us there.

You may not see it now, but Domonic Brown, Adam Morgan, Cody Asche, Freddy Galvis, Cole Hamels, Tommy Joseph, and Red Phanatic will lead us to a new era of reforged glory. Things may appear dark to us today as we stand on the shore watching the approaching Spanish Armada or Roman Legions or Welsh coal miners coming to sack our towns and destroy our way of life, but we will prevail. Red Phanatic will lead us to a glorious future.

Like Moses, she (and Red Phanatic is obviously a "she") will not enter the promised land, but she will open the door and show us our kingdom.

I cast you down, Wet Luzinski, false prophet and doomsayer! Join with me and with the Red Phanatic! Shun the accursed heretics who say "nay" and who would meekly accept the yoke of Mr. Met or Teddy the Losingest President Ever.

You scorned Red Phanatic with your witless mirth, Wet Luzinski, but I will take up your banner of scorn and carry it as a symbol of the Red Phanatic's wisdom and troofiness. Red Phanatic does not promise that it will be easy. She has sent us hellfire and abomination, but we shall use it to scour our enemies and the world, preparing it for the Ace Who Will Mount the World! 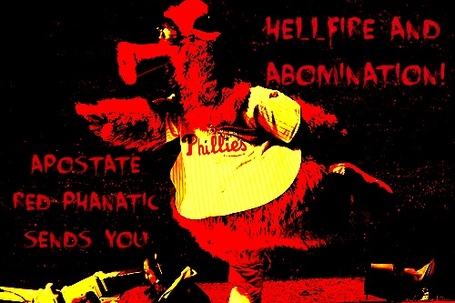