If they stay healthy and perform at recent levels, many Phillies will continue climbing the team's career lists, and may even get to some targets that few in MLB history have reached.

Assuming they are healthy, Phillies players will be looking to reach the milestones below in 2013:

Rollins moved to the top 2 or 3 on several Phillies all-time lists in 2012, and already this year he has:

By the end of the season, he could also be:

- the Phillies' all-time leader in doubles: he needs 21 to tie Ed Delahanty for most in team history
- 2nd in stolen bases: his 8th steal will tie Delahanty at 411
- 8th in both home runs and RBIs
- 6th in walks and strikeouts

In addition, he will be shooting for these targets among all shortstops in MLB history:

Finally, sometime around the middle of the year, Rollins will probably hit his 200th career home run, becoming the 10th player in Phillies history to hit that many. That will also make him just the 9th player in MLB history (and the only shortstop) to have 2,000 hits, 400 stolen bases, and 200 home runs.

(as to what this all means for his Hall of Fame chances, here is one view)

Legend:
- # needed in 2013 to reach each milestone (e.g. Rollins' 2nd home run of the year will tie him with Bobby Abreu for 10th on the Phils' all-time list, at 195)
- Rankings refer to the Phillies' career lists, unless specified as All-time ("AT"); non-Phillies milestones are in blue

Utley has already hit is 200th home run this year, and yesterday (Tuesday) he also tied Dick Allen for 8th place on the Phillies' list with his 204th. By the end of the year, possibly his last with the team, he could climb as high as...

He long ago became the Phillies' all-time leader in getting hit by a pitch, and he's moving up the MLB career list as well. If he resumes his typical career pace of 1 every 8 games or so, he should at least get to 17th all-time. I would even say he has a shot at 15th if he stays healthy, but since he hasn't been plunked at all in the first 27 games, we are likely to see a lower total this year -- maybe he's becoming a little more careful. 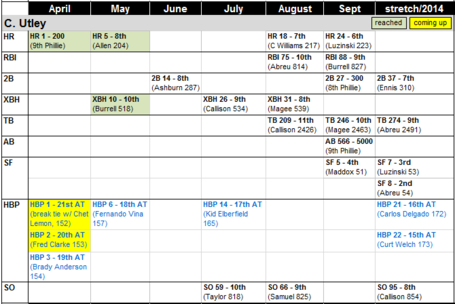 Howard already this year has passed...

Before the year is out, he will likely also reach...

- Hamels will pass Larry Christenson (220) and Curt Schilling (226) to move into 6th pace in career starts for the Phillies.
- He will likely also pass Schilling (101) for 6th place in team wins, after also surpassing several 19th century Phillies.
- With his 102nd strikeout, he will tie Grover Cleveland Alexander for 5th most in team history, at 1,409.

Assuming he starts 23 games this year, he will also become the 11th active pitcher to start 400.

If the Phillies start winning some games, Papelbon will continue moving up the all-time list for Saves -- he could be 26th by the end of the season.

His 36th game will tie him with Gene Mauch for the most games managed for the Phillies, at 1,332.

When the Phillies win their 53rd game, it will be the 1,000th victory of Manuel's career, making him the 59th manager in history to reach that round number.