Out of the Park Baseball 14 Reviewed - A Phillies' Perspective

A review of Out of the Park Baseball 14, an incredibly in-depth baseball management simulation and oh God I'm such a nerd.

Share All sharing options for: Out of the Park Baseball 14 Reviewed - A Phillies' Perspective

I am indeed a nerd. If you're still reading this, you are also a nerd.

Good, now that we've cleared that up. Out of the Park Baseball 14 is, as it's name would suggest, the 14th iteration of the franchise. Each one has been progressively more in depth, and, with the addition of a WAR stat in last year's version, has become very SABR-friendly indeed.

I had the opportunity to get an early release version (it's been on sale for a couple weeks now, but I just wanted to brag), and have played through the 2013 season as the Phillies, natch. But before I tell you what's gonna happen, here's how it works.

In OOTP, you as a player take a somewhat vague role at the helm of a professional baseball team in either a real-world situation, a fictionalized real world (same league structure as MLB & MiLB), or a completely fictional setup. Want to lead your Khartoum Nine against the Amundsen-Scott Station squad to challenge for the Sudan-Antarctica Pennant? Knock yourself out. Want to see how much fun it is to work for Jeff Loria? LOLMarlins to your heart's content. Want to take the helm of Ty Cobb's 1913 Tigers? Roll Tide, my column:

My preferred style is the former. Fake teams, fake players, fake soap company. If my Anchorage Aces finish 22-140 or 135-27 (both have happened), it's a fun diversion. But no-one cares about that, so I'm basing this review on the 2013 Phillies. Of course, I neglected to take any screenshots until the end of the season, so, whatever. In any case, when you "get a job" here's what you see: 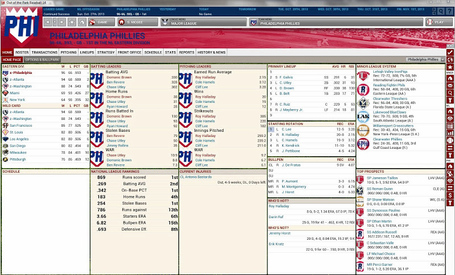 Just ignore all the numbers for now. I'll explain them later.

From here, you can see the particulars of your new team. You can review the roster: 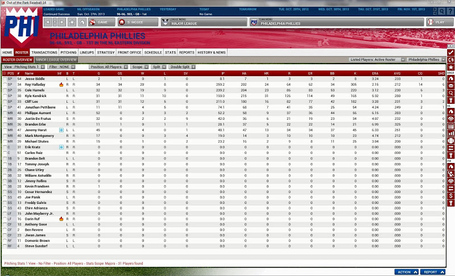 Take a look at your pitching situation: 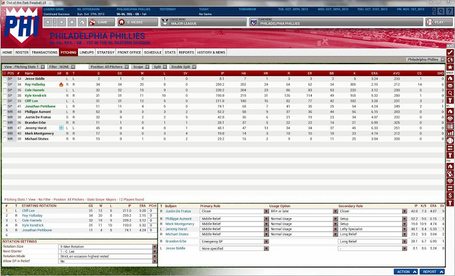 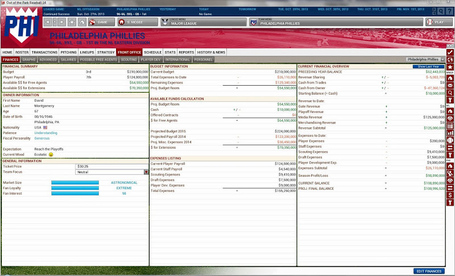 And plenty more. This is probably a terrible review, isn't it. I've never reviewed anything before. Sorry. I'll happily refund your subscription price at the end of this expedition.

So, those numbers. You're probably wondering about some of them. Well, around the end of May, the LOLPhils were struggling mightily at 19-35. So, being future-conscious, a rebuild seemed in order. Which brings up the OOTP trade system. If this game has one weakness, it's the ease with which it consumes my time. It's like the sand pit monster thing from Star Wars, except for time instead of prisoners.

If it has two weaknesses, however, the first is the time thing, but the second is it's trading system. It's unbelievably easy to fleece other clubs. For example, on June 6th, I shipped Delmon Young (who was hitting quite well at the time), Ezequiel Carrera, Michael Martinez and $6,000,000 to Cleveland for prospects. In this case, two top prospects, shortstops Ronny Rodriguez and Dorssys Paulino. The next day, I flipped Rodriguez to Pittsburgh, along with Mike Adams, Mitch Gueller, Tyler Cloyd and another $6,000,000 for Jameson Taillon and Luis Heredia. If Ruben tried to make either of these deals, he'd be jailed for impersonating a comedian.

But I'm not Ruben, I'm Smartypants McGee, and I wasn't done shedding getriddables. In late June, I sent Jonathan Papelbon, Raul Valdes, two low level prospects and $4,500,000 to San Francisco, in exchange for Brandon Belt, Joe Panik and three minor leaguers. The same day, I made the most painful deal of the season: flipping Ryan Howard to the Yankees with Cody Asche, in return for Mark Montgomery, Austin June, two more minor leaguers and $12,000,000. Howard had hit 21 homeruns with a 1.030 OPS to that point.

A quick trade sent Michael Young to Oakland in exchange for Addison Russell; and finally, John Lannan, Laynce Nix, Humberto Quintero and $2,500,000 were sent to Toronto, in exchange for Anthony Gose and some minor leaguers.

After those six deals, the Phillies had slashed payroll to $116,500,000; while mortgaging their short-term for continued success. Or so I thought. With an embarrassing lineup: 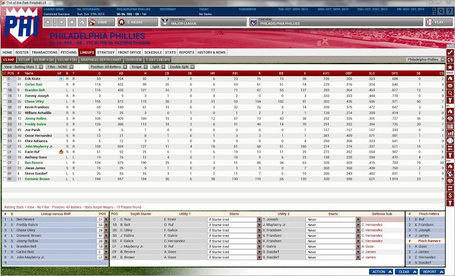 the Phillies sat at 43-40 on July 1st, and expected to go nowhere but down. Instead, we won 11 in a row, then six in a row, and ultimately finished the season with 56-26 stretch. Woah. We lost in the first round to Atlanta, of course, but it was a hell of a run, simulated or not.

There was one other pretty epic highlight, though:

Out of the Park Baseball 14 is available for Windows, Mac and Linux for $39.99. If you're a nerd like me, and if you're reading this, you are, it's well worth the cost. I'd give it 4.5 Antiquallses. If you're more interested in the mechanics of baseball itself, and less in the animated figures making fools of themselves on your screen, OOTP is highly recommended.