The Phillies lose in mundanely bad fashion to the #GodBacks.

Share All sharing options for: The Bottom of a Fifth - D-Backs 2, Phillies 1

Tonight's game just kind of sucked, guys. Really. It sucked all around. The Phillies pretty much beat themselves, and I don't have the energy to write too much about it. Not like losing 86-2 to the Marlins sucked, but late 1970s Jimmy Carter Malaise sucked.

Cole Hamels sucked. He pitched six innings, allowed six hits, walked FIVE (one intentional), struck out three, and was charged with both runs. He stumbliewumblied a couple defensive opportunities, and threw a bit of a hissy fit on the mound.

Chase Utley sucked. He got a walk but went 0 for 3.

Michael Young sucked. He made a badass defensive play to nab Martin Prado at third, although you can blame that on D-Backs' 3B coach Whatever Hisnameis. Young also went 0 for 3 with a walk and two strikeouts.

Ryan Howard sucked, although it isn't his fault that other teams line up fortyseven defenders in a six foot wide line between first and second.

Delmon Young kinda sucked because he's Delmon Young. He hit a single and got thrown out a second because he runs as fast as a one-legged goat being eaten by wolves. He finished 2 for 4.

Domonic Brown didn't suck. He went 2 for 4, and scored the Phils' only run, and made a laser beam throw to kick off Michael Young's aforementioned defensive play.

Carlos Ruiz was megh, hitting 1 for 3.

Ben Revere was... wait, Ben Revere was in this game? I swear I didn't see or hear of him once. I think that's wrong. He probably sucked.

John Mayberry Jr came through in a pinch-hit at-bat... and was forced at second on a ball hit down the right field line. ???

Kevin Frandsen was awesome, with a clutch RBI hit in the 7th, but because Mayberry was thrown out because he ran like Delmon Young, Frandsen got credited with a fielder's choice.

Phillippe Aumont gave up a hit and walked Cody Ross who just sucks in general; Jeremy Horst came in and walked six more guys but none scored because he's a wizard even though he sucked. Mike Adams didn't pitch in the high-leverage situation because it wasn't the 8th, and he sucks.

Laynce Nix pinch-hat against Heath Bell, who sucks, against whom Nix was one for six, but Nix sucked and the game ended. 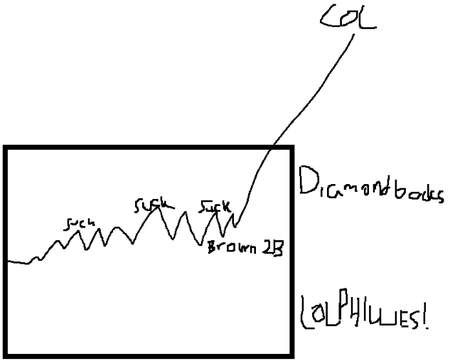 With the loss, the Phils fall to 16-20, ∞ games behind the first place Braves. Tomorrow night, the Phils turn to Megastar Tyler Cloyd in an attempt to even the series against Kennedy family scion Ian Kennedy. Someone should probably ask Kennedy what he knows about Benghazi.