How are the Phils doing on key team stats, including team defense? Also Ryan Howard's plate "discipline", and Jimmy Rollins about to become the Phillie with 10th most RBIs and 7th most walks (!) in team history.

Share All sharing options for: Phillies Stat Notes: May 14, 2013 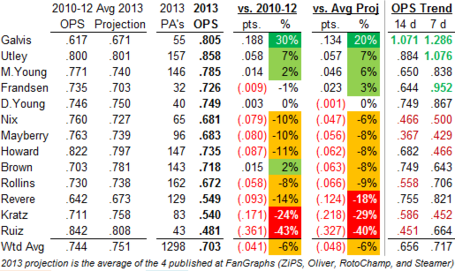 In Thursday's Stat Notes we looked at Ben Revere's plate discipline stats, and noted that while he sees a lot of strikes, he has among the lowest swing rates in baseball. Unfortunately, he is more likely, relative to the league, to swing at balls outside the strike zone (65th lowest out of 180), than in it (1st lowest).

Another even more interesting case of plate discipline, and at the other end of the spectrum in many respects, is Ryan Howard. Here is where he ranks in those same stats, out of the 173 qualifying hitters in the majors:

The Phillies are 5th in the NL in how often they get to a hitter's count (2-0, 3-0, or 3-1). However they are 15th in the league in how often they take the next pitch in those situations. As they did last year, at least, they continue to use hitters' counts to look for a pitch to drive more than other teams do, as opposed to trying to get on by a walk.

And who would have guessed that they're 6th best in getting runners home from 3rd with less than two out? 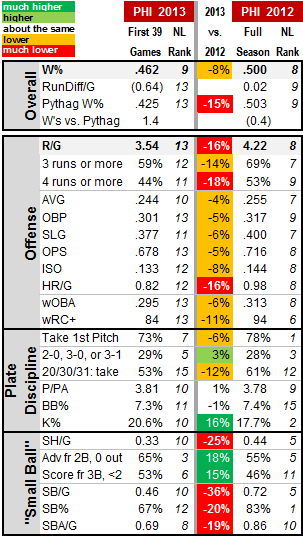 The Phils have given up the 3rd fewest unearned runs in the NL, so while they're only 12th in ERA, they're slightly better in total runs allowed, ranking 9th.

I was going to say next here, that the low number of unearned runs should not be taken to mean that the Phillies have played good defense, but in trying to prove that point, the stats are conflicting at best:

- 3rd in the NL in Defensive Efficiency, which is calculated as the % of balls in play that are converted into outs
- 4th in Total Zone runs saved
- 9th in BIS' Defensive Runs Saved, essentially at the league average
- 11th in Fangraphs' UZR

(they're also 3rd in the one stat that's least useful, but which is most likely to be quoted by the broadcast team: fielding percentage)

The "eyeball" test would tell us that their defense should be near the bottom, but I suppose it's possible that the numerous noticeable gaffs are outnumbered by less noticeable but competent-to-good play the rest of the time. 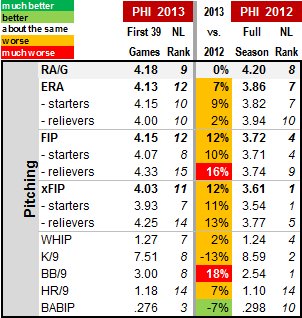 Unlike last year, when the NL East was the best division in the NL by a good margin, it's been easily the worst of the three so far this year. 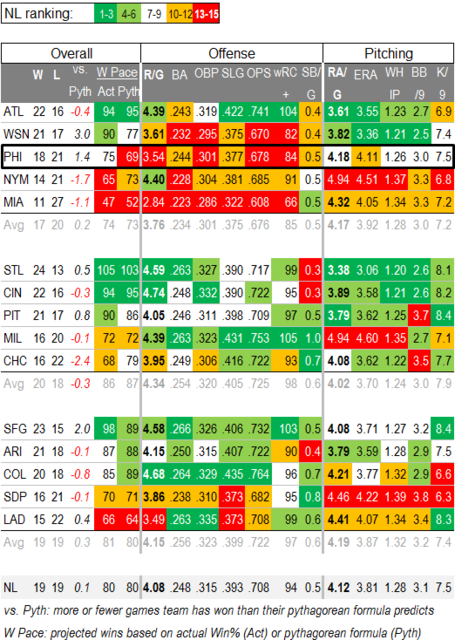 Utley hasn't had a month with 50+ PAs and no HBPs since September 2004, when he batted only 52 times. April 2013, with 106 PAs, was his first such month since then, and he already has also gone the first 51 PAs in May without getting plunked.

Cole Hamels
- Hamels' next start, scheduled for tomorrow, will be the 220th of his career and will tie him with Larry Christenson for 7th most in Phillies history. Hamels has already started the 4th most games by a Phils lefty, behind only Steve Carlton (499), Chris Short (301), and Curt Simmons (262).

Charlie Manuel
- With 1,335 games, Manuel is now the longest-tenured manager in Phillies history, surpassing Gene Mauch's 1,331.
- If he makes it to the Phils' 53rd win this year, he will become just the 59th manager in MLB history to win 1,000 games.