At the season's 1/4 mark, how are the Phils doing on key team stats compared to last year, and compared to the Reds? Phils hitters among the leaders (few and far between), and chasing milestones, including the record for consecutive solo home runs.

Share All sharing options for: Phillies Stat Notes: May 17, 2014 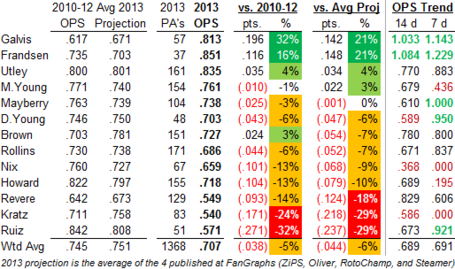 Chooch has been looking better in the last week, but Howard is still utterly lost.

At the season's quarter mark, Phillies are hard to find among the league's leaders in most categories:

I've changed the color coding from indicating higher(green) or lower (red/orange) to indicating better or worse. Only two categories changed: K%, obviously, and also SH/G, where I took the position that fewer sacrifices are better. The other possibly debatable position I took is that more SB attempts are better.

1) Successful sacrifice for a pitcher with one out.
2) Advancing any runner with none out.
3) Driving in a baserunner with the second out of the inning.

And whaddayaknow, the Phillies lead the NL in productive outs. Which I suppose points out what should be obvious, that productive outs and small ball tactics are like the fine tuning knob. The important things are getting on base and hitting for power, and sadly the Phillies are near the bottom in both of those. 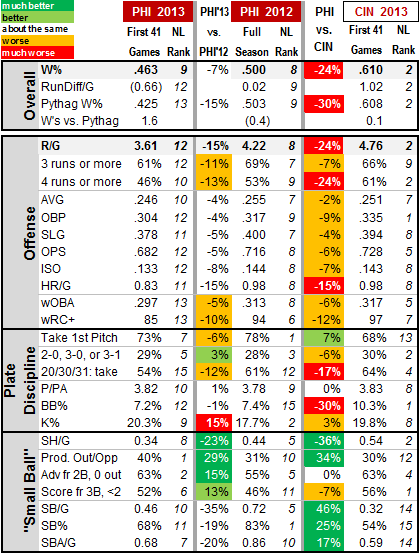 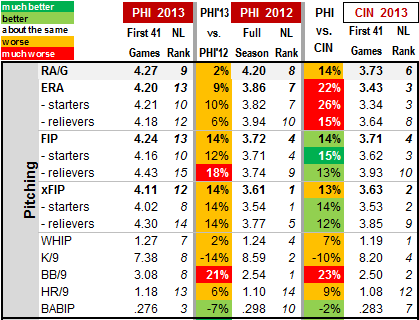 The Reds are pretty good. The have scored the 2nd most runs in the NL (just barely behind Colorado), but that's due in part to their home park. Their pitching has been at least as impressive, with the 3rd lowest ERA in the NL, and FIP (4th) and xFIP (2nd) which are also near the top. 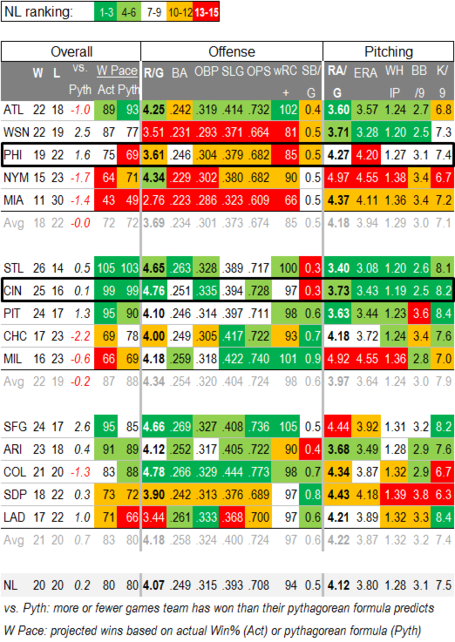 Utley hasn't had a month with 50+ PAs and no HBPs since September 2004, when he batted only 52 times. April 2013, with 106 PAs, was his first such month since then, and he already has also gone the first 55 PAs in May without getting plunked.

Cole Hamels
- Hamels' start against Cleveland on Wednesday was the 220th of his career and tied him with Larry Christenson for 7th most in Phillies history.

Jonathan Papelbon
- He needs 3 more saves to tie Bob Wickman for 29th most in MLB history, at 267.

Consecutive Solo Home Runs
The Phillies have hit 16 straight home runs without a man on base. The mark for consecutive solo home runs was set by the Giants in 2011 when they hit 21 straight, breaking the record of 19 set by the 1914 Phillies.

The Phils’ last home run with a man on base was the 3-run shot by Domonic Brown on April 27th. John Mayberry Jr. then started the streak of solo homers by going back-to-back after Brown.

By the way, one would think that the lower a team's OBP, the higher the percentage of home runs that would be solos, but this year at least there is almost no correlation (.08) between solo home run %’s and OBP.