The Phillies got the shit kicked out of them by "Charles" Bronson Arroyo. Then things went downhill.

So today was kinda crappy. This recap will be accordingly crappy, also because I couldn't watch (because, really, Fox, people in Alaska love Baltimore...), and I couldn't get At-Bat to work properly. So.

Kyle Kendrick pitched somewhat less than awesomely, being tagged for four runs on eight hits and four walks over six innings. He struck out two, and those guys must feel especially sucky. As mediocre as Toolbags was, though, the bullpen came on and took a giant dump in everyones' Cheerios. B.J. Rosenberg, called up to solve all the problems, recorded four outs, but allowed four hits, a walk, and three runs. Phillippe Aumont gave up two hits and a run; and Chad Durbin, pitching where he belongs in garbagetime, allowed two more runs on two hits.

Bronson Arroyo, on the other hand, pitched exactly like we expected. He was like Nolan Cy Johnson Koufax Halladay Martinez Clemens Johnson Carlton Maddux Grove Alexander. He was lights out. Four hundred strikeouts, zero hits, negative seven runs, Arroyo did it all.

The Phillies offense can be excused for failing to produce against the Greatest Pitcher of All Time; but still, today's performance was unpleasant. Jimmy Rollins went 1 for 3 with a walk; Domonic Brown went 2 for 4, including a double that he failed to stretch into a triple (you know, guys, maybe just stop that?); and Michael Young, Ryan Howard and Erik Kratz each recorded a hit. That's about it. Everyone else kind of sucked. Chase Utley drew a walk, but made out on the first pitch a few times and looked bad. I dunno.

Scott Franzke mentioned something interesting on the radio. When Sarge Matthews is in the radio booth, the Phillies have been outscored 30-2 this year. Thirty to two. Maybe Continued Success should go sit in with the other team?

Charlie described the game thusly on the post-game press conference:

Anyway, that's about it. 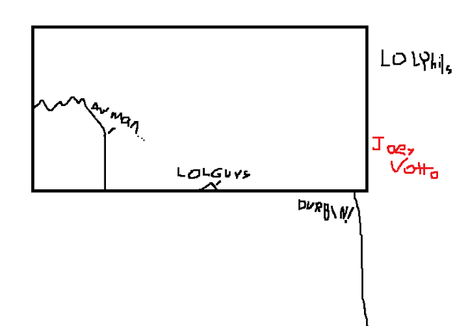 The Phils drop to 20-23, which is the moral equivalent of being a billion games out of first. They'll try to lose in less embarrassing fashion tomorrow by sending Baby Bone to the mound against the Reds' Homer Bailey.