Who Are These Guys? Phillies 3, Reds 2

Share All sharing options for: Who Are These Guys? Phillies 3, Reds 2

This isn't entirely a bad thing, but I'm starting to despair of figuring out this Phillies team. They've been shut out six times in 44 games, and have allowed double digit runs six times while yet to score 10 or more in a game themselves. They're letting inherited runners score at a near-record pace, are 1-8 in games started by their $144 million ace pitcher, and have just two regulars with an on-base percentage over .320. Their pythagorean record going into today--what they "should be" based on how many runs they've scored and allowed--was 17-26.

They've also seen former rotation afterthought Kyle Kendrick blossom into something like an ace, have gotten an almost Marty Bystrom-esque first month from rookie pitcher Jonathan Pettibone, and have won six times in their last at-bat. None were more exciting or unexpected than Sunday's 3-2 win over the Reds, giving the Phils the series victory and a 7-5 record in their last 12 games against the Giants, Diamondbacks, Indians and Reds, all first- or second-place teams.

Pettibone didn't figure into the decision, but he kept it close Sunday while the bats were waking up. The 22 year old went a career-high seven innings, allowing two runs on seven hits and three walks. The first run was a long solo homer in the second to registered Phillie-killer Jay Bruce, who's got 12 in 155 career at-bats against the Phils; the second came in the sixth after a Domonic Brown throwing error put Joey Votto on second base, and Todd Frazier doubled him in with two outs.

With Reds starter Homer Bailey holding the Phillies off the board for seven innings, that figured to be more than enough. This wasn't exactly yesterday's display of offensive futility against Bronson Arroyo; the Phils had a number of hard-hit outs, and put men in scoring position in four of the first six innings. But Bailey got outs when he needed to, running his personal scoreless streak against the Phils to 14 innings.

The break came when Dusty Baker put in old friend Jonathan Broxton for the eighth inning. With two outs, Ben Revere just beat out an infield hit, then stole second. Broxton walked Michael Young, then gave way to Sean Marshall, who surrendered a single to Chase Utley for the Phillies' first run since the eighth inning Friday night. But Brown flied out on the first pitch he saw, leaving the score 2-1 heading into the ninth.

It was quickly clear that Reds closer Aroldis Chapman didn't have his absolute best stuff. He walked pinch-hitter Delmon Young on four pitches, which is damn difficult to do. Wanting to save back John Mayberry, Jr., Charlie Manuel pinch-ran pitcher Cliff Lee--who promptly got picked off, prompting some of us to turn Twitter temporarily blue. But Erik Kratz, in the game after Carlos Ruiz tweaked his hamstring running the bases in the second, promptly tied things up with a solo home run to left... and three pitches later, Freddy Galvis won it with a solo shot that just stayed fair down the left field line. 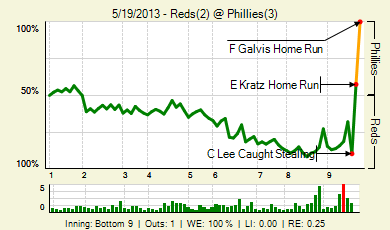