Comparing the Phils' team stats to last year and to the Marlins; Rollins looking to join exclusive company.

Share All sharing options for: Phillies Stat Notes: May 20, 2013 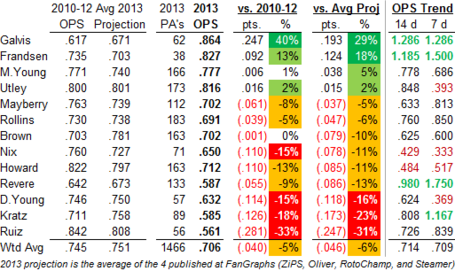 2013 doesn't look like it's going to help this stat, but in researching something else I came across this tidbit -- highest cumulative fWAR by a team's catchers, 1990-2012:

Phillies Team Stats vs. 2012 and vs. Marlins

As mentioned in Friday's Stat Notes, the color coding here has been changed from indicating higher/lower, to better or worse. K% therefore changed, as well as SH/G, where I took the position that fewer sacrifices are better. The other possibly debatable position I took is that more SB attempts are better.

And again, the other change is the addition in the "small ball" section of productive outs as a % of opportunities, which are defined at baseball-reference.com as 1) successful sacrifice for a pitcher with one out, 2) advancing any runner with none out, or 3) driving in a base runner with the second out of the inning.

The Phils are 2nd in the NL in how often they are successful in advancing the base runner in those situations.

That is one of the few bright spots for the Phillies, breaking up an otherwise steady stream of worse than average performances. But they can at least say they're not as bad as the Marlins, who continue to display an impressive series of "15"s down their list of offensive rankings: 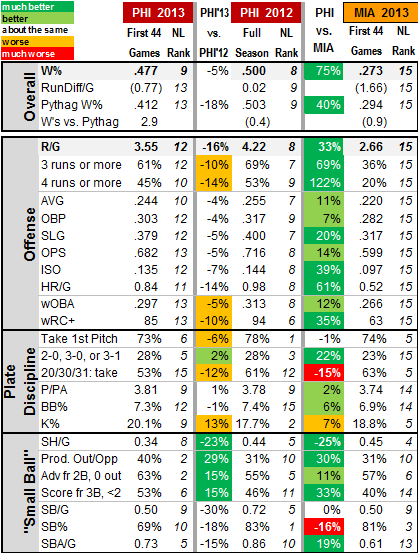 I've added four defensive metrics to this table. Below are their descriptions -- the first three from baseball-reference.com, and UZR from FanGraphs:

- Defensive Efficiency: Percentage of balls in play converted into outs. This is an estimate based on team defensive and pitching stats.

- Total Zone Fielding Runs Above Average: The number of runs above or below average the player/team was worth, based on the number of plays made.

- Defensive Runs Saved Above Average: The number of runs above or below average the player/team worth, based on the number of plays made. Also known as the Dewan Plus/Minus system.

- Ultimate Zone Rating: the number of runs above or below average the player/team is worth, by comparing them to the league average in how often they convert balls hit to their zones into outs. The number shown here is actually the more comprehensive "Fld" number in FG, which combines UZR and a catcher rating, since catchers aren't included in UZR. Good description of UZR here.

Maybe it's because the sample size is small, but the Phillies' numbers are quite different across the four methods to this point, ranking as high as 3rd in Total Zone, and as low as 14th in UZR. The four should not be viewed as being equally valid. UZR and DRS are probably the most accurate, but all of these, including UZR and DRS, would presumably be subject to small-sample noise after only a quarter of the season. 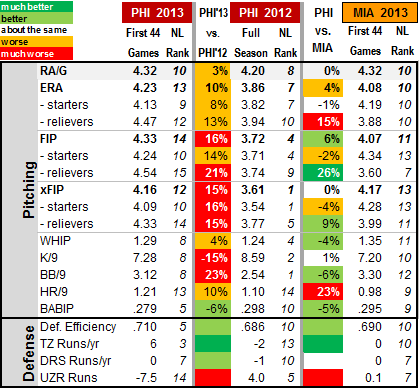 And no team has averaged less than three runs scored per game over a full season in 44 years -- last done when the 1969 expansion Padres averaged 2.89. 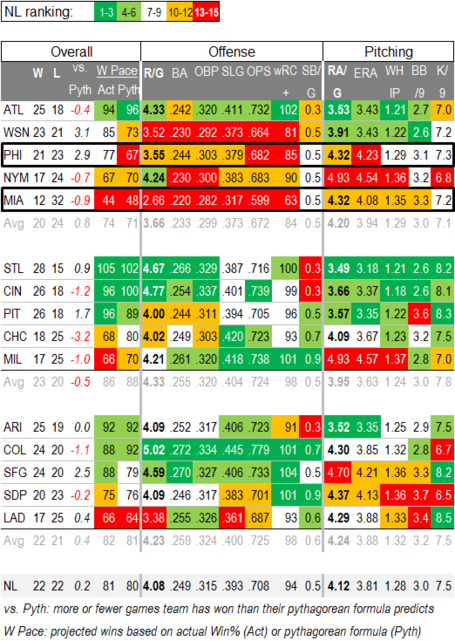 Ryan Howard
- Howard's next extra base hit (18th this year) will tie Johnny Callison for 8th on the Phillies career list with 534.

Jonathan Papelbon
- He needs 2 more saves (10 for the year) to tie Bob Wickman for 29th most in MLB history, at 267. Clearly the names atop the lists of relief pitchers are somewhat less impressive than those atop the lists of starters.

Consecutive Solo Home Runs
Rollins' two-run home run on Friday snapped the Phillies string of solo home runs at 16. The mark for consecutive solo home runs was set by the Giants in 2011 when they hit 21 straight, breaking the record of 19 set by the 1914 Phillies.