A high-level overview of the key players in the Phillies' system, by position and level.

This is an overview of the Phillies farm system -- the tables below show the starters at each position and each level, and the pitchers with the most innings so far this year. It's meant as a high-level companion to Cormican's weekly and monthly prospect roundups.

Also shown are some basic stats, and these are the links to each team's pages on baseball-reference.com for more details: 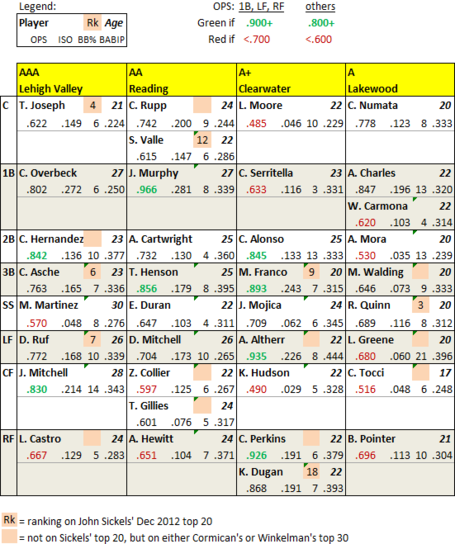 Lehigh Valley
- Darin Ruf has been up and down so far, and most recently, down.
- Jermaine Mitchell is continuing to hit well and draw walks.
- Cesar Hernandez is trying to show there is an alternative to re-signing Chase Utley.
- Tommy Joseph is still out with a concussion, and hasn't done much with the bat, but he is still the 9th youngest player in all of AAA.
- And not that this should come as a surprise, but Michael Martinez is really never going to hit. At all.

Reading
- The only other time Tyler Henson has hit like this was in the hitter-friendly Pacific Coast League last year (.842 OPS)
- Three years after stumbling in Clearwater at age 24 (.679 OPS), Jim Murphy has finally gotten to Reading at 27, and is one of the bright spots at the plate for the Fightins.
- Cameron Rupp is seeing less playing time now that Sebastian Valle has been demoted, but still a solid season so far.

Lakewood
- As Cormican has reported, Roman Quinn is heating up after a slow start, hitting .308/.426/.462 in his last ten games.
- Carlos Tocci has struggled, but as the youngest player anywhere above the rookie leagues, he's got plenty of time.

About this list: if a pitcher has both starts and relief appearances, he's categorized based on whichever he has more of. Starters and relievers are then ranked by innings pitched this year at that level (which is why J.C. Ramirez, for example, is on both the LV and Reading lists). 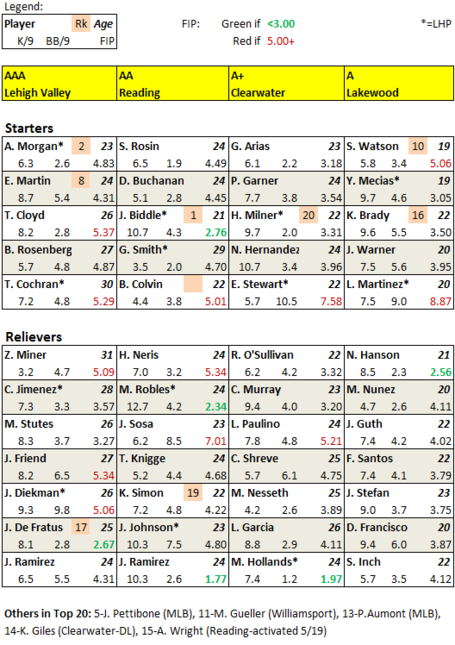 Reading
- Jesse Biddle is the only Phils starter at any level with an FIP under 3.00, although Yoel Mecias is close.
- Maurico Robles has struck out 33 (and walked 11) in 23.1 innings.