Phillies team stats vs. last year, and vs. the Nationals. The Nats have struggled so far, particularly at the plate, where they've been worse than any team in the NL except for the lowly Marlins.

Share All sharing options for: Phillies Stat Notes: May 24, 2013 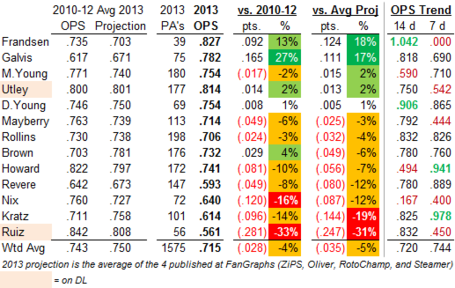 Phillies Team Stats vs. 2012 and vs. Nationals

When table of team stats and rankings below showed the Marlins, there was a string of 15's in the rankings down the right-hand column. Well, the Nationals have the 14's. In spite of decent power (which is to say, about the same as that of the Phillies), and an average walk rate, the Nats are next to last in the NL in most key offensive categories: runs per game, OBP, OPS, wOBA, and wRC+.

All of the green in the PHI vs. WSN column shows that as bad as the Phils' offense has been, it has still been better than that of the Nationals in virtually every respect. Below is each team's OPS by position:

The Nats can't help but improve on these numbers going forward, unfortunately for the Phillies. 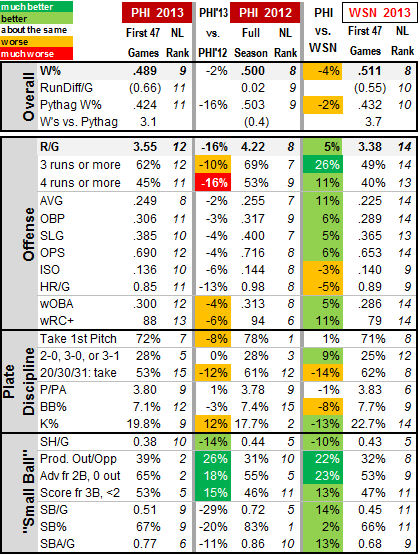 Also, I'll mention one more time the addition of the success rate in productive out opportunities in the "small ball" section above. Productive outs are defined at baseball-reference.com as: 1) successful sacrifice for a pitcher with one out, 2) advancing any runner with none out, or 3) driving in a base runner with the second out of the inning.

The Phils are 2nd in the NL in how often they are successful in advancing the base runner in those situations.

The table below now includes four defensive metrics -- the first three from baseball-reference.com, and UZR from FanGraphs:

- Defensive Efficiency: Percentage of balls in play converted into outs. This is an estimate based on team defensive and pitching stats.

- Total Zone Fielding Runs Above Average: The number of runs above or below average the player/team was worth, based on the number of plays made.

- Defensive Runs Saved Above Average: The number of runs above or below average the player/team worth, based on the number of plays made. Also known as the Dewan Plus/Minus system.

- Ultimate Zone Rating: the number of runs above or below average the player/team is worth, by comparing them to the league average in how often they convert balls hit to their zones into outs. The number shown here is actually the more comprehensive "Fld" number in FG, which combines UZR and a catcher rating, since catchers aren't included in UZR. Good description of UZR here. 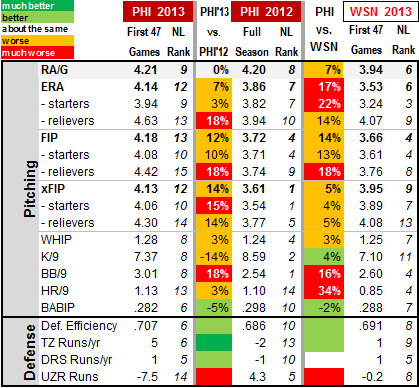 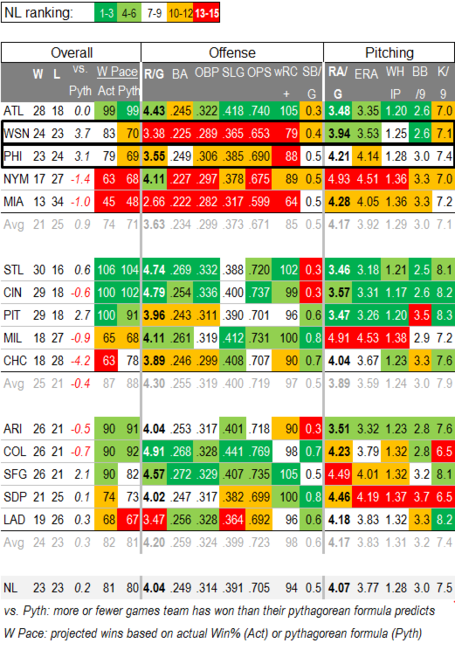 Chase Utley
- Utley's first HBP of the year on Monday moved him past Chet Lemon into sole possession of 21st place in MLB history, with 152.
- His next HBP will tie him with Hall of Fame outfielder Fred Clarke for 20th.

Ryan Howard
- Howard's double on Wednesday was the 534th extra base hit of his career, tying him with Johnny Callison for 8th on the Phillies career list.
- Five more extra base hits (22 this year) will tie him with early twentieth century outfielder Sherry Magee for 7th most, at 539.
- His next Sac Fly (4th total) will tie Pat Burrell for 10th most on the Phils with 42, and the one after that will tie Von Hayes, Bob Boone, and Mike Lieberthal for 7th most.

Finally, in "celebration" of Michael Martinez rejoining the major league club, below are some highlights of his time with the Phillies:

Phillies - career: With a career OPS+ of 39, Martinez also has the 5th lowest career OPS+ in Phillies history, among non-pitchers with 300+ career PAs. He has the lowest one since John Vuckovich's 14 in 1970-81 (which is the lowest ever by a Phillie).