How do the Phillies compare in key stats vs. last year, and vs. the Marlins?

Share All sharing options for: Phillies Stat Notes: May 3rd, 2013

- Phillies Hitters vs. Projections
- Phillies Team Stats vs. 2012 and vs. the Marlins
- NL Standings and team stats
- Milestones 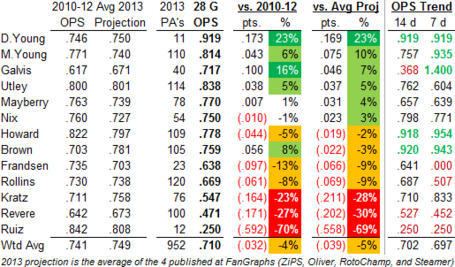 The Youngs are leading the way! Howard and Brown have moved up to within a few points of their projections, although, especially with Howard, we need to see more than what was projected.

Pierre has also impacted the SH/G row for both teams. With his departure, the Phillies are back near the bottom (or "top", depending on your point of view on sacrifices), while Miami has jumped from fewer sacrifices than average last year, to among the highest in the NL.

The string of "15"s down Miami's list is really amazing. At least they don't strike out a lot, so they've got that going for 'em. 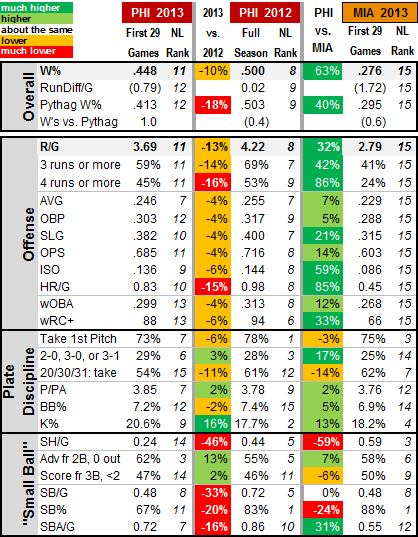 Thanks in part to the fireworks in Cleveland, Phillies pitching is again near the bottom in home runs allowed. 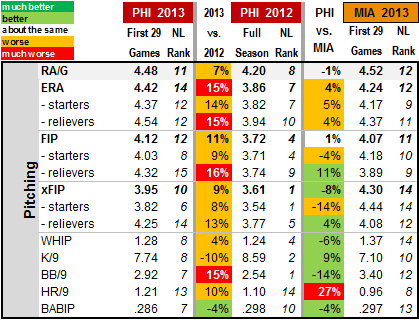 Below are all the starting pitchers' lines to date, including game scores. Color coding is:
- green: 6+ IP, 3 ER or less (i.e. "Quality Start")
- red: simply, more ER than IP
- orange: all others 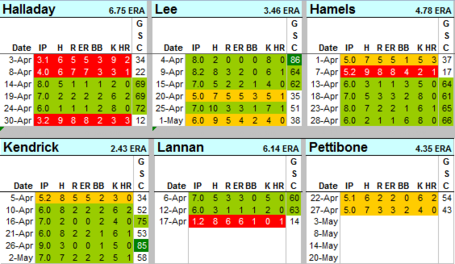 And the game scores in graphical form:

Based on game scores, the two best starts this year were Lee's first one in Atlanta (86), and Kendrick's 3-hit shutout last week against the Mets.

Other things to note: 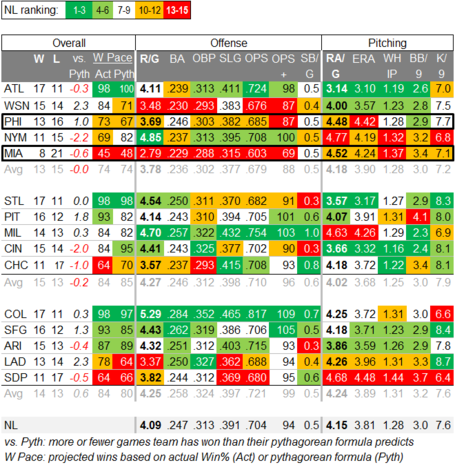 Jimmy Rollins
- His next home run (2nd this year), will be the 195th of his career, tying him with Bobby Abreu for 10th on the Phillies' all-time list.
- He needs 5 more walks (13 total) to tie Ed Delahanty for 7th most in Phils' history with 643.

Chase Utley
- Utley's home run on Tuesday tied him with Richie Allen for 8th in Phillies' history at 204.
- His next HBP (which will be his first this year) will break a tie with Chet Lemon and move him into sole possession of 21st place in MLB history, with 152. A second HBP will tie him with Hall of Fame outfielder Fred Clarke for 20th. By the by, I did not remember (if I ever knew) that Chet Lemon's nickname was "The Jet". Possibly because his two highest stolen base totals were 13, and 8. He did steal 28 in the minors one year.

Ryan Howard
- With (shockingly) two walks last night, Howard needs two more (7 this year) to tie Greg Luzinski for 11th in Phils' history at 572.
- He needs 5 more extra base hits (17 total) to tie Johnny Callison for 8th on the Phillies career list with 534.

Charlie Manuel
- Barring rainouts or unexpected "personnel changes", the first game of the series in Arizona on Thursday will be Manuel's 1,332nd managing the Phillies, tying him with Gene Mauch for most in team history.