Brown the 17th Phillie to hit 10 homers in one month. Rollins now 7th in walks and 10th in RBIs in Phils history.

Share All sharing options for: Phillies Stat Notes: May 31, 2013

Domonic Brown: 10 homers in May

Domonic Brown became the 17th Phillie to hit 10 homers in one month in May, and the first since August 2009. It's now been done a total of 45 times:

The Phils have hit 29 home runs so far in May, which is the 17th biggest total for May in the team's history.

The Phillies now have the highest % of solo home runs in the NL:

At least this year, there is very little correlation (-.09) between the % of a team's home runs that are solo, and a low team OBP. 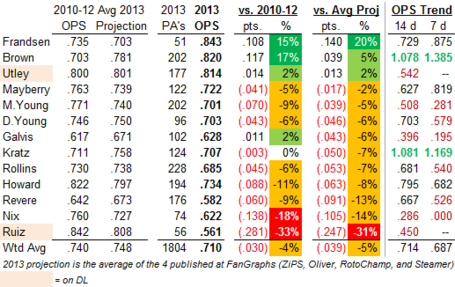 Phillies Team Stats vs. 2012 and vs. Brewers

The Brewers' offense has been around the middle of the pack this year, with decent average and power, but near-worst walks. In fact, it's interesting how similar the Brewers' stats look to those of last year's Phillies (with the notable exception of the stolen base attempts -- Milwaukee is the runningest team in the NL).

One way Milwaukee is similar to this year's Phillies team is in run differential and the resulting pythagorean winning percentage. The difference between the two has been that the Phils have won about 4 and a half games more than their Pythag, while the Brewers have won about 2 less. Commenters have pointed out that if you exclude games by injured pitchers (i.e. Halladay/Lannan), the Phils' pythag. is more in line with their actual wins, but I haven't looked to see if any similar adjustment can be made for the Brewers. 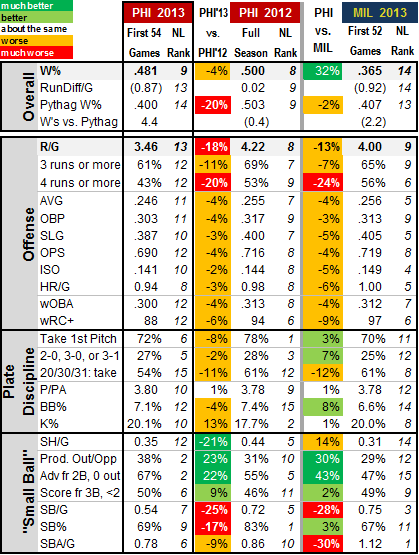 The Brewers' pitching has been among the worst in the league, with the most runs allowed, and the highest ERA: 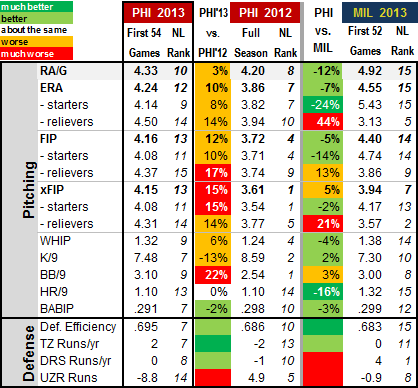 Milwaukee has lost six in a row coming in. Combined with the Cubs' winning their last four, the Brewers have fallen to last place in the Central. 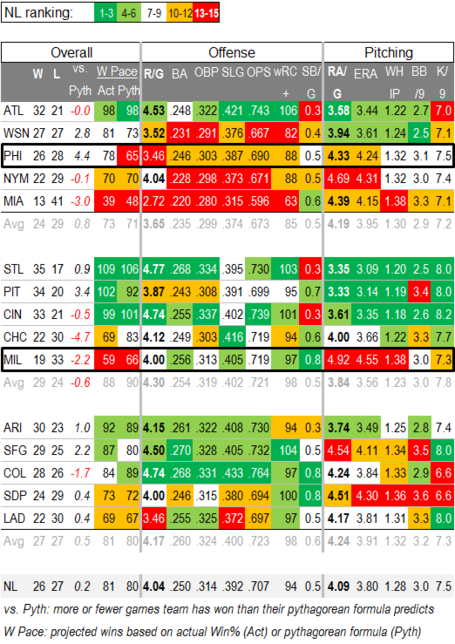 Ryan Howard
- Two more extra base hits (22 this year) will tie him with early twentieth century outfielder Sherry Magee for 7th most in Phils history, at 539.
- His next Sac Fly (4th total) will tie Pat Burrell for 10th most on the Phils with 42, and the one after that will tie Von Hayes, Bob Boone, and Mike Lieberthal for 7th most.

Jonathan Papelbon
- With his save on Wednesday, Papelbon passed Bob Wickman for 29th most in MLB history, at 268. Next is Rod Beck at 286, and at the current pace he will likely reach that in September.

Jacoby Ellsbury
- His 5 steals last night were the first 5-steal game since 2009, when Carl Crawford stole 6 on May 3rd, and Dexter Fowler 5 on April 27th. It was the 21st game of 5+ steals in history -- and the first ever against the Phillies. Also noticed while looking this up: on August 24, 1974, Davey Lopes stole 5 bases. In 7 attempts. It's the only 7-attempt game in the modern era, from what I can tell.