One man's journey from dismay, to despair, to transcendent, irreverent boredom. Then back to despair.

Share All sharing options for: Notes From Undergroundout: Marlins 14, Phillies 2

This game doesn't merit a narrative recap. Honestly, if it weren't a school night I'd strongly consider a comprehensive alcoholic cleanse to dislodge as much of this ugly memory as possible without inflicting serious liver damage. So instead you get my notes, as compiled throughout a stupefying three hours on a beautiful spring Sunday.

1st inning: This isn’t going well. Roy Halladay has no command. Four pitch walk to Juan Pierre. Steal, advance to third on groundout. Walk to Placido Polanco—how does that happen?

Doc gets ahead of Justin Ruggiano, then plunks him in the ass to load the bases. I imagine this is what it’s like to watch a loved one suffocated with a pillow.

2-run double to Marcell Ozuna, 2-0 Marlins. Walk to Greg Dobbs—DOBBS! Then a foul-out: chance to escape with two outs and the 8 hitter, .169-hitting Adeiny Hechavarria, due. Nope: three-run triple to the .169 hitting 8 hitter. We trail 5-0.

Top 3rd: Once again, Doc hits Ruggiano after getting ahead of him. Walks Ozuna. Dobbs singles. Strikes out Olivo. Hechavarria hits a grand slam home run. 9-0; Good night, Doc. And a stout go-fuck-yourself to everyone booing him.

Bottom 3rd: Ben Revere walks, then is doubled off when Raul Valdes popped up a bunt try in the 3rd. the sort of heady play we’ve come to expect from the 2013 Phillies. Freddy Galvis then follows with a double.

6th inning: I've decided to look up the biggest wins of the 1962 Mets:

Sometime in the 7th inning: I wonder if Mark Trumbo’s teammates call him "Rusty."

Bottom of the 8th: Phils get on the board as Marlins start kicking the ball around. Maybe they won't suffer a worse loss than any victim of the '62 Mets...

Top 9th: Or maybe Ruggiano will match his two HBPs with two home runs, and we're down 12 runs again.

Fangraph of I can't believe I watched (or "watched") the whole thing: 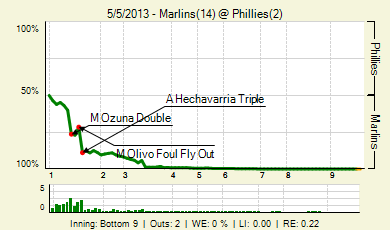