How do the Phillies compare with how they did last year, and with the Giants?

Share All sharing options for: Phillies Stat Notes: May 6th, 2013

Both hitting and pitching fell from 11th, before the weekend, to 12th, but their record actually improved from 11th to 10th, although we certainly would have expected them to capitalize on this last series more than they did.

- Phillies Hitters vs. Projections
- Phillies Team Stats vs. 2012 and vs. the Giants
- NL Standings and team stats
- Milestones 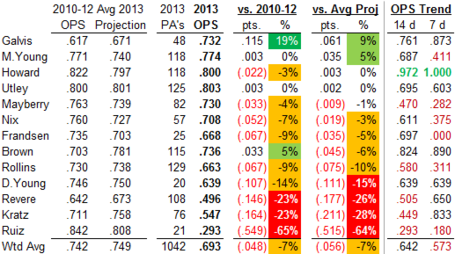 Howard, Utley, and Mayberry are all at their projected OPS. Young is a little higher, and matching his three-year average. Rollins has struggled over the last two weeks, while Revere may finally be getting comfortable. Meanwhile, the catching position, which was such a bright spot last year, has been a black hole in the lineup thus far.

Comparing this year to the last three in more detail: 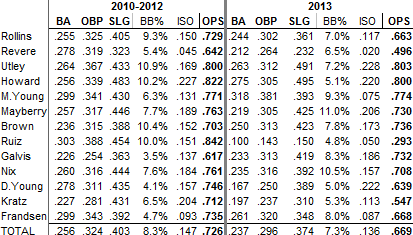 And the changes by category: 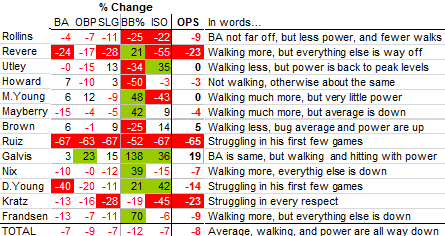 Phillies Team Stats vs. 2012 and vs. the Giants

Between the 20-2 shellacking in the Cleveland series and yesterday's 14-2 drubbing, the Phillies' run differential would project (based on the pythagorean formula) a record of 12-20, two games worse than their actual record.

The only high-level offensive stat that ranks even in the middle of the pack so far is, surprisingly, their power, with an ISO that's now ranked 9th and almost up to last year's (modest) number.

Pitches per PA are now up to 5th, and their walk rate has inched up almost to last year's level, at least, although that's not saying much.

The Giants, meanwhile have not shown great plate discipline themselves, ranking 9th in walks, and 15th in pitches per PA, but they've scored the 5th most runs in the NL, and have the 4th highest wOBA and wRC+.

They have four position players with at least 1.1 fWAR so far:

For comparison, these are the top 4 fWARs on the Phillies: 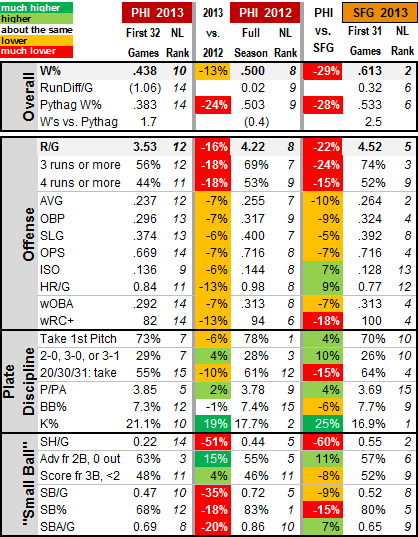 The Giants have had one of the best bullpens in the league so far, ranking in the top 3 in reliever ERA, FIP, and xFIP. Sergio Romo has amassed 0.7 fWAR, with 18 Ks and 1 walk in 15 2/3 innings, and is leading the NL in saves with 12.

Their starters haven't been as successful, with the notable exception of Madison Bumgarner:

Vogelsong in particular seems to have been unlucky, with a .352 BABIP, and a 18.6% HR/FB rate, even though his batted ball stats are in line with career rates. 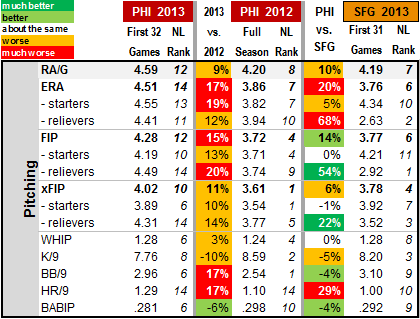 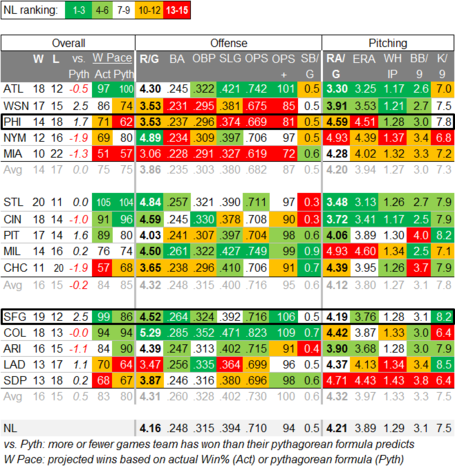 Jimmy Rollins
- His next home run (2nd this year), will be the 195th of his career, tying him with Bobby Abreu for 10th on the Phillies' all-time list.
- He needs 4 more walks (13 total) to tie Ed Delahanty for 7th most in Phils' history with 643.

Ryan Howard
- Howard's next walk (7th this year) will tie Greg Luzinski for 11th in Phils' history at 572.
- He needs 3 more extra base hits (17 total) to tie Johnny Callison for 8th on the Phillies career list with 534.

Charlie Manuel
- The first game of the Arizon series on Thursday will be Manuel's 1,332nd managing the Phillies, tying him with Gene Mauch for most in team history.