The Phillies lost to Milwaukee behind a rather plebian performance by Cole Hamels and holy shit guys Dom Brown is for real.

Preface: I did not watch this game. I did not listen to this game. I got home from work about half an hour ago. And I don't even care about the score, because this year is all about Dom Brown, who, frankly, is awesome.

I told yas so.

And a month ago he was a bust who should have been traded. At the risk of spoiling an upcoming piece:

THe rest of the game sucked, by all accounts. Cole Hamels, got knocked around, although there was some BABIPpery bloopery boo going on. The bullpen held it together well enough, with solid looking outings by Justin De Fratus and Cutesy Stutesy, but the offensive outburst wasn't enough to overcome Hamels' early struggles.

Also, Ryan Howard bunted. It didn't work, but he tried. Yay Ryan. I believe that is his first career bunt attempt. 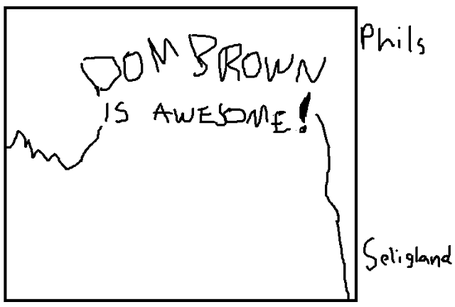 The Phillies drop to 26-28, two games under .500. Tomorrow they try to even the series against Seligland by sending Tyler Cloyd to the hill against Wily Peralta. Is that pronounced "willy" or "wiley" (ie crafty). What is it with guys named Peralta anhd spellinhg theihr namehs wronhg?

Since I didn't watch this game, I mayhaps perchance might have possibly missed a detail or two. Feel free to embellish in the comments.