Ben Revere and Michael Young are on pace to infamy, while Dom Brown looks to continue to make a case for the All Star team. Elsewhere, Raul Ibanez is still going strong.

10th best record in the NL, three games under .500 at the 67 game mark. Not. Good. They're in third place in the East, 7.5 games behind Atlanta, who have played no better than the Phillies after a fast start. They're also 7.5 games back in the race for the 2nd wild card spot.

The half-way point is only two weeks away now, so how do the 2013 Phillies compare to recent teams? 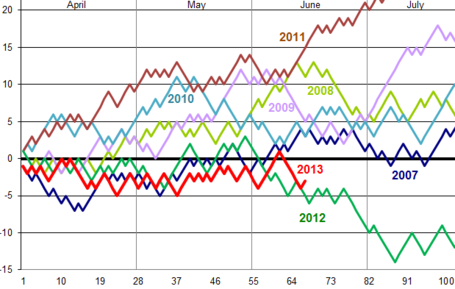 At least they're ahead of 2012's dismal pace. The only glimmer of hope here is that aside from the dominant 2011 team (and 2008, before their June swoon), the 2013 Phillies are the proverbial "one good streak" away from having a record very comparable to any recent Phillies playoff team. However they're obviously older, and by all evidence to date, suckier, so the chances of that happening are looking increasingly slim.

The trade deadline is after game 107, another week past this graph, but by game 100 the Phillies front office will likely have a good idea of what they will want to do in that last week of July. 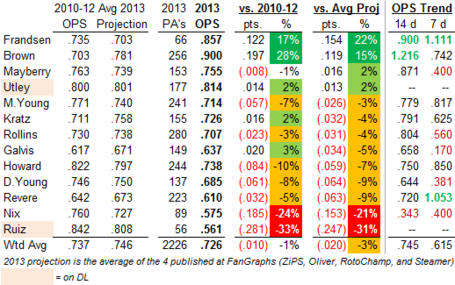 He is still on pace though for one of the lowest RBI totals in history for a full season. With 7 to date, he is on track for just 17 for the year, in 539 PAs. These are the lowest totals since 1920:

However MY is still on pace for one of the highest GIDP totals ever, and now that he's out of the leadoff hole he will get more opportunities to threaten the record. He has 13 so far, which projects to 33 for the year, assuming 95% playing time the rest of the way. These are the highest totals in history:

Domonic Brown
Brown has cooled off, but still compares well with leading NL outfielders as we head towards selections for the All-Star team. Here is where he ranks among NL outfielders, and also in the NL overall:

Below are the NL outfielders with the highest OPS so far. Justin Upton, Carlos Beltran, and Bryce Harper (.973 OPS, but not enough PAs to qualify), are the leading vote getters in the latest balloting. Last year the NL took eight reserve outfielders to the All-star game, and based on OPS (as well as his HR and RBI numbers), Brown would appear to have a good shot if he can stay around his year-to-date pace:

In addition, with 13 home runs so far he's on pace for 31 for the year, joining this group of players who have hit 30 at age 41 or older:

Yep, Ibanez is on pace to become the first player in major league history to hit 30 home runs in his age 41 season. 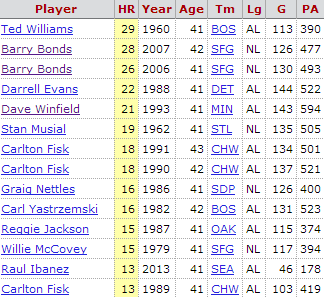 Colorado has been an offensive powerhouse this year, and for a change, they're also hitting very well on the road, leading the NL in both road Slugging Pct, and road OPS. 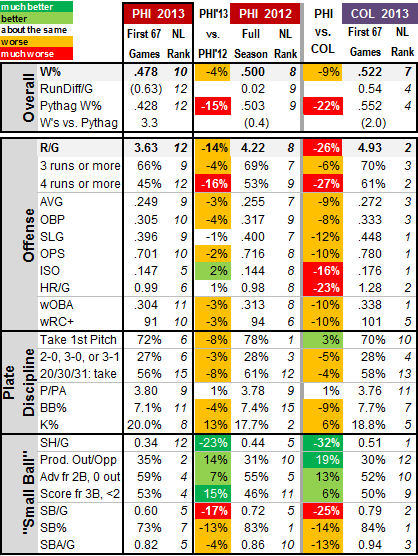 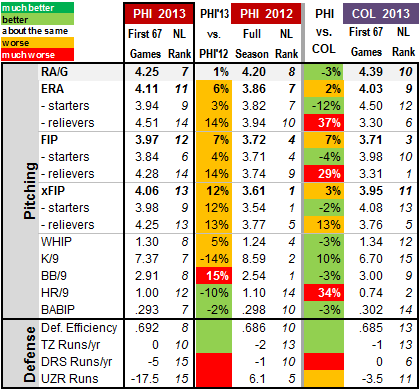 Colorado is in 3rd place in the West, 2.5 games behind division leading Arizona, and 4.5 games back in the race for a wildcard spot. 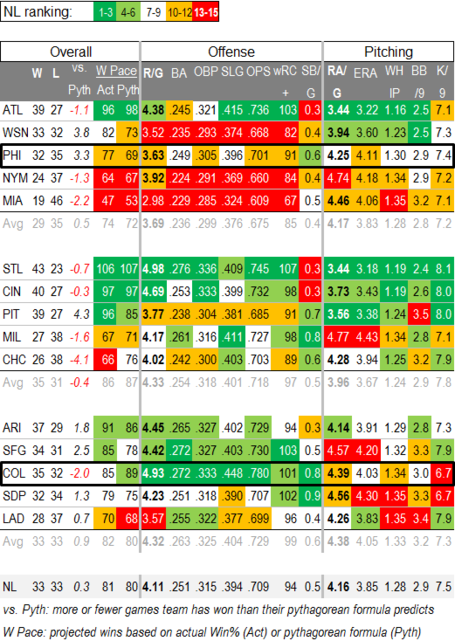 Jimmy Rollins
- Rollins' RBI yesterday moved him past Bobby Abreu into 9th most in Phils history, with 815.
- Two more stolen bases (8 total) will tie him with Ed Delahanty for 2nd on the Phillies all-time list, at 411. The 19th century's Billy Hamilton, who holds the Phillies record with 508, will survive the Rollins era as the team's all-time leader.
- He also needs 3 more home runs to reach 200 for his career, becoming the 10th Phillie to do so. That will make Rollins just the 9th player (and only shortstop) in MLB history to have 2,000 hits, 400 stolen bases, and 200 home runs.

Chase Utley
- Utley's next HBP will tie him with Hall of Fame outfielder Fred Clarke for20th place all-time, at 153.