"They Never Go First to Third"? Not So

The Phillies are no longer the threat on the bases that they once were in the days of Victorino, Werth, and younger versions of Rollins and Utley. But they can still take an extra base.

Share All sharing options for: "They Never Go First to Third"? Not So

When a team is winning, I don't get the sense that fans think that team is doing everything well. It seems that fans (and talk show hosts) have a sense for why a team is doing well, and it doesn't spill over to other areas. When the Phillies were hitting home runs, there was still a sentiment among fans (rightly or wrongly) that they struck out too much, or weren't clutch, or relied TOO much on the home run, and so on.

But when a team is losing, or at least losing more than most fans expected, then everything the team does is cast in a negative light, as fans grope for reasons for why the team is not performing. They're not walking enough, they don't have any power ("other than Domonic"), they're not clutch (a perennial fan favorite), and just heard while at lunch from two talk show hosts who agreed on the point, "they never go first to third".

Well, as many here know (which is why it's surprising when people who make their living talking about sports don't know), you can look this stuff up.

And what you find is that the Phillies have been the 4th best team in the NL at going from 1st to 3rd on a single: 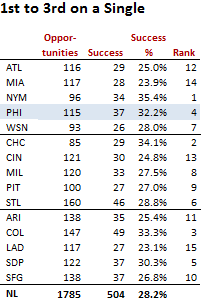 We can also check this for going from 1st to home on a double. The Phils are also 4th in the NL in taking this extra base: 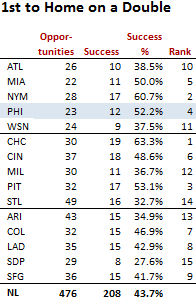 Finally, there is one category where the Phillies have been below average, and that's going 2nd to home on a single, where they rank 11th: 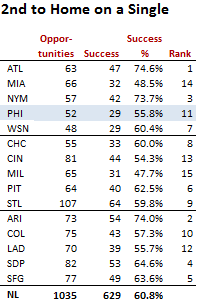 Overall, combining all of these, the Phils are slightly above the league average in their ability to take the extra base so far this season: 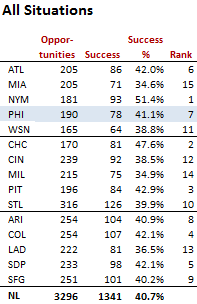