The highest paid pitcher in Phillies history is on pace for 23 losses this season. Cole Hamels absorbed yet another defeat he didn’t deserve Sunday, undone by a miserable offensive performance even by the club’s accustomed standards and some unfortunate bounces of the sort he must be used to by now.

Let’s stipulate that of the three runs he surrendered, Hamels bears blame for the first one: a second-inning solo home run from Willin Rosario on the first pitch he saw. But after a strikeout and a walk, Hamels ended the second with a double play, then set the Rockies down in order for the next four innings, bringing a streak of 14 straight retired into the seventh.

This was even more impressive considering that the Phils’ offensive half-innings barely lasted long enough for Hamels to catch his breath in the thin Denver air. Rockies starter Jhoulys Chacin, owner of a 6.13 ERA over his previous eight starts, followed the path of many before him by getting well against the Phillies’ anemic bats. Chacin set down the side in order on nine pitches in the first inning, worked around a Domonic Brown single to get his three outs on twelve pitches in the second, and needed just six pitches in the third. It went on from there, highlighted by a seventh inning in which Chacin allowed two singles, yet still needed just nine pitches to retire the side thanks to a first-pitch double play from Jimmy Rollins.

The Hamels Luck manifested in the seventh. Carlos Gonzalez led off with an infield single. Hamels got ahead of Michael Cuddyer and thought he had him struck out, but home plate umpire Marvin Hudson disagreed. Cuddyer followed with a flare to shallow right field that went for a double, and both men eventually came around to score for a 3-0 lead that must have felt like 30-0. Gonzalez added a two-run homer in the eighth against Justin De Fratus, finishing the day with two hits in four trips; this actually brought down his season average against the Phillies.

The Phils avoided the shutout on Chacin’s 85th pitch, which should have been his last: with Ben Revere on second base, Rollins hit a deep but playable fly ball that Cuddyer misjudged for a double. Ryan Howard followed with a single on Chacin’s next pitch to drive in Rollins, and the Rockies starter gave way to new closer Rex Brothers, who retired Brown to earn his third save.

The Phils end their road trip with three wins and seven losses, calling to mind the old line from Bull Durham: how in the hell did they ever win three? 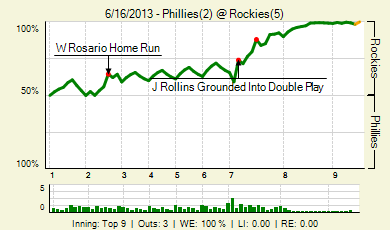