The Phils start a series with NL East rival Washington, and even though they're limping home from a 3-7 road trip, they're still not out of the division race because the Braves and Nats haven't been playing any better over the last 60 days.

Here we are, following back-to-back losses by the Phils, and back-to-back wins by the Braves. And in spite of that, these are the records of the NL East's "big three" since 4/19, after the Braves’ hot start:

These are arbitrary endpoints, of course, and to take any solace from this requires that one assume that a) the Phillies can at some point put together a streak similar to the one the Braves started the year with, and b) that the Braves and Nationals are not much better teams than they've shown so far.

Hamels' record fell to 2-10 after yesterday's loss, and commentators today are continuing to point to the offense as the chief culprit for that. Joecatz has rightly raised the point that Hamels deserves at least some of the blame. Below is a list of pitchers with similar ERA and FIP to Hamels, and it seems that two things can be said about all of these to one degree or another:

1. They're having OK but not great seasons
2. They've been somewhat unlucky

Where Hamels stands out is that, in addition to not pitching great, and being somewhat unlucky (which alone would have limited him to 4-5 wins), he has also gotten the worst run support of anyone in this group: 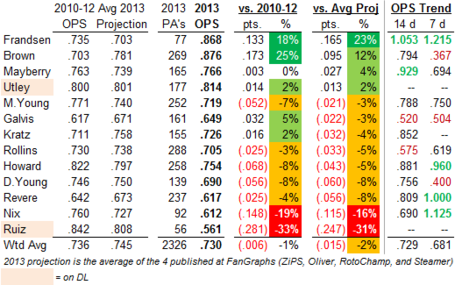 Phillies Team Stats vs. 2012 and vs. the Nationals 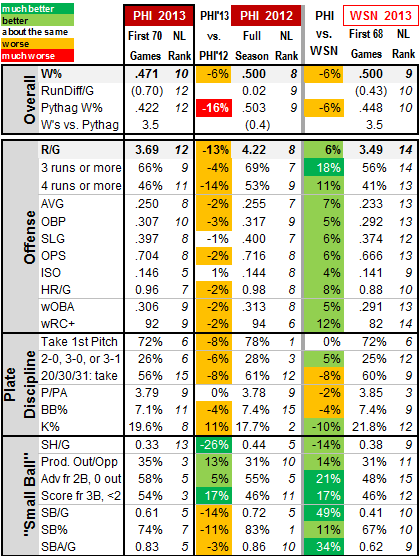 Washington's pitching, on the other hand, continues to be solidly above average: 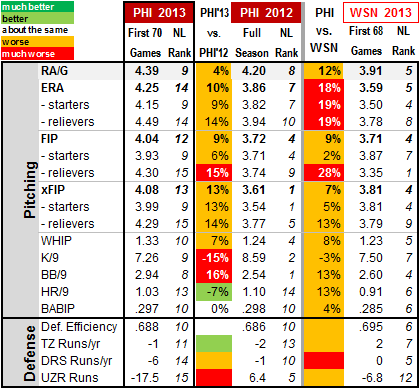 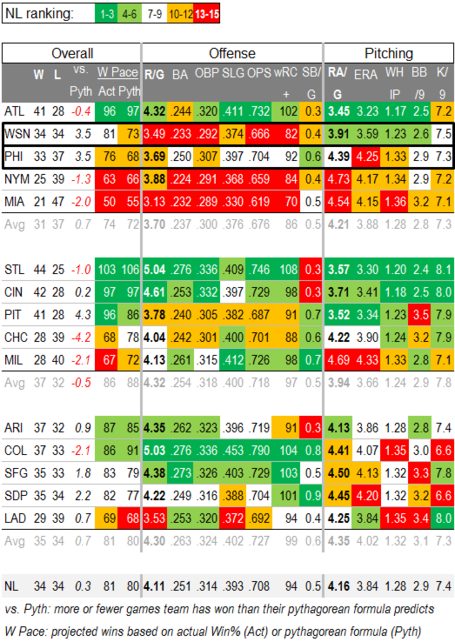 Jimmy Rollins
- Two more stolen bases (8 total) will tie him with Ed Delahanty for 2nd on the Phillies all-time list, at 411. The 19th century's Billy Hamilton, who holds the Phillies record with 508, will survive the Rollins era as the team's all-time leader.
- He also needs 3 more home runs to reach 200 for his career, becoming the 10th Phillie to do so. That will make Rollins just the 9th player (and only shortstop) in MLB history to have 2,000 hits, 400 stolen bases, and 200 home runs.

Rollins hasn't had a steal since June 5th, and hasn't homered since May 31st.