When Davey Johnson and Charlie Manuel gather their players before the game tonight between the Nationals and the Phillies, they will share the same motivation: Phillies pitcher John Lannan.

The Phillies, finishing their lockerroom preparations and noshing on the spread, are mingling in the clubhouse. Charlie Manuel comes in, stands at the opening, and hollers,

"All right fellas, 'fore you go outside and stretch and things like that, listen up, and, like."

[the players saunter over]

"All right, so that road trip's over. It's done and I done said what I wanted about that. Question is, like, what are we gonna do about it? Well this week we got some divisional games, like, and with a team that's just a coupla games ahead of us. We got a home crowd and it's hittin' weather, so I wanna see you go out there and like, keep attacking pitches and stuff."

[Cole Hamels' eyes roll as he sighs audibly. No one dares look in his direction.]

"Hey, so like, we got one of our guys back. Lannan's back. [2-3 guys clap] Right, that's all right. He's gonna lead a parade of guys back, like Chooch, like Utley, and, like, eventually we'll have Halladay for the push. We gon' be all right by the break, so now we gotta push these next few weeks and stuff."

"Lannan's always meant good luck to us. We always won with Lannan around. So, like, now he's back. The front office made a commitment to stick with guys who are winners, who want to be around a winning club. So we got Lannan and he pitched real decent for us 'fore he got hurt and stuff. Like, keeping the ball down so the defense can go get it and keep us in the ballgame. We win with Lannan. He's a veteran who gets it, who understands big league hitters and can be real aggressive, like, feisty, a guy who ain't afraid none to pitch inside a little."

[a few players clear their throats while looking at the carpet]

"Welp, that's it, and like, if you gotta get ready you know what you gotta do."

Manuel walks away. The music gets turned up and players continue their conversations. Meanwhile, over in the visiting clubhouse, Davey Johnson calls the Nationals over....

"It's a big series this week and I just want to take a couple of minutes here to let you know what's on my mind. It's been a while since we played the Phillies and neither they nor us have had the kinds of starts we'd hoped for. But for crissakes fellas, we're way, way better than them. It's time to show the hell up.

"Special game tonight for us. We're going up against an old friend and former teammate, John Lannan. Some of you may like him, have beers with him, still play golf with him, whatever. What I have to say isn't really about the man. I'm sure his momma loves him and he gets some despite that eyebrow, whatever [chuckles throughout lockerroom].

"Don't laugh, Jayson, if it weren't for the fact you're a big leaguer only biker chicks and Mrs. Claus would dig you. [lockerroom howls in derisive laughter.]

"Listen, up, settle down, okay, okay. Point is, like him or not, that's up to you. Once you're in that box tonight he's your opponent and you guys are pros, so you know what to do. But keep in mind something as you climb in there tonight. The guy you face on the mound is a symbol to me, and I want you guys to go after him as that symbol. Because for us Nationals, John Lannan matters.

"Boys, John Lannan matters because he is a relic of our bygone era of expansion team Sideshow Bobs, the sound of vuvuzelas cascading from the upper deck, snow in April, road trips that flew us from Seattle to San Juan, SI picking us last year after fucking year and roofs that rained concrete down upon us. If you guys don't remember any of that, well, that's the point. He is a worn out shoe to be laced together with his twin and launched toward a telephone wire as a neighborhood marker which says: "We don't give a damn about how the place looks anymore."

"We bear our bats tonight to beat John Lannan, so swing your bats endlessly against him to pound this ignominious past squarely into its grave. Oh, and if he hits you, professional discretion. I got your backs. Just let me throw you out of the way so I get a good lick in. "OK, hands together on mine. Natitude on three. One, two, three. " 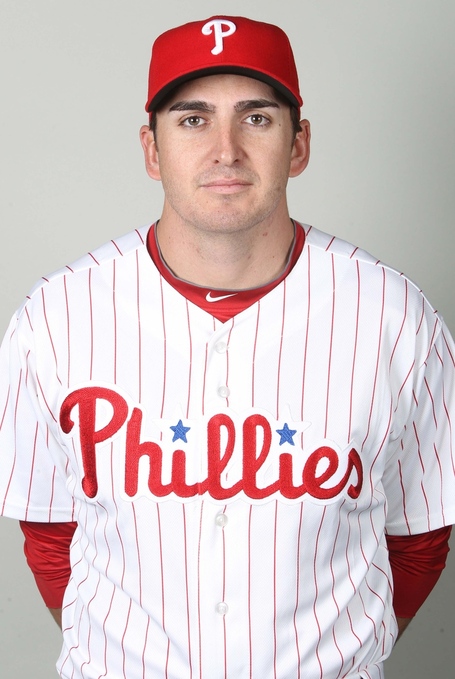