The stupid Nationals gave themselves the magical comeback they always want, but in the end failed miserably and lost the game to Ryan Howard, Domonic Brown and the also stupid sometimes Phillies.

Share All sharing options for: That's So Ryan: Phillies 5, Nationals 4

I'll be honest with you guys.

Through a combination of work and vacation, I've skipped a lot of Phillies stuff the past few days. And you know what? It's been great. I've been more relaxed, less angry, and when my girlfriend walks in and sees the cat on the opposite side of the room, she doesn't assume it was my kicking that got it there.

So tonight was a vacation from my vacation, and boy was it blood curdling.

John Lannan! Tell me, ladies and gentlemen of The Good Phight; if you took this man's eyebrows and put them on your significant other, would you be able to look them in the face? Don't answer that.

There he was, out there, throwing five innings like some sort of recently rehabilitated fifth starter. He allowed two runs throughout the evening, on six hits with a walk and four strikeouts. Not a fun start, but you didn't really think it would be one of those. Lannan is a guy who can face his former team and not have it be a whole thing. Because he's John Lannan, and have you seen those eyebrows?

Lannan was solid, holding our arch enemies to two runs, which in a lot of cases is an unreachable lead for this team to overtake. But Ryan Howard hit his first home run in 30 years tonight (happy birthday, kid with that sign), so after the second inning, we knew that anything could happen.

The home run tied the game at one, after Jayson Werth's "They'll Never Walk Down Broad Street in Celebration Again" campaign went into phase 6.7-A with an RBI single in the top of the second. Howard's dinger and Delmon Young's two run RBI double (after a Michael Young TRIPLE over Jeff KLOLbernus and a J-Roll walk/steal) in the third gave the Phillies a two run lead.

Back to back doubles in the fourth by Kurt Suzuki and Steve Lombardozzi drew the Nats within one obnoxious run, making every girlfriend's cat in the vicinity pretty nervous.

But the fifth brought great tidings. Ben Revere worked like he's supposed to and got on base, immediately stealing second. And then, Ryan Howard - yes, the Ryan Howard - punched him in with the clutch RBI single we never get.

And so, it was 4-2, when Mike Adams replaced Michael Stutes - he of the scoreless, hitless two innings. Adams left a fastball up for Ian Desmond with a man on third and allowed the Nationals' horrible broadcast team to pat each other on the back.

But it wasn't until the top of the ninth that the crushing defeat seemed imminent. Less crushing, now that we're all numb to stupid losses, but you always feel a slight twinge of pain before the shadows settle in.

Jonathan Papelbon came in to protect a one run lead; Jonathan Papelbon, one of the few names uttered when you are requested to name potential Phillies All-Stars (or recently, trade targets). Paps retired two Nationals before something called Chad Tracy homered off of him, evening the score and ruining everything.

Fortunately, Roger Bernadina woefully K'd swinging just after, and we moved to the bottom of the ninth.

So, now what? Some kind of miraculous walk off win? Whatever.

Fernando Abad skipped into the game for the Nationals, allowing a lead off single to Ben Revere and a supplemental single to Jimmy Rollins, moving Revere to third. Steven Lerud crept in there and Roger Bernadina'd, leaving things up to this man: 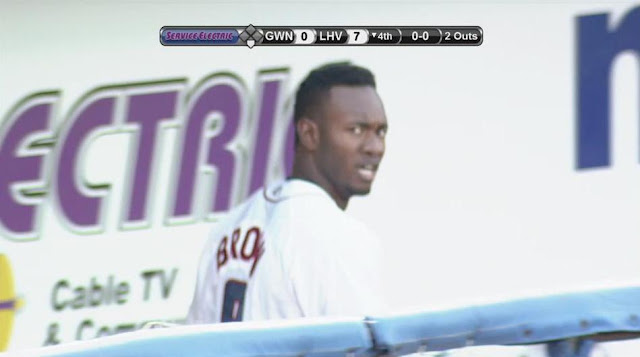 Dom Brown stepped in, salivating for his first walk off hit, and he got it on a line drive up the middle that bruised the Nationals and saved this cat's ribs.

Fangraph of nice one, Nationals: