The Agony of Victory: Phillies 7, Brewers 5

If you turned off today's game after seven innings to clean the garage, mow the lawn, or take a nap, well done.

Share All sharing options for: The Agony of Victory: Phillies 7, Brewers 5

Through seven innings, this was a dream game. The Phillies jumped to a big early lead as Domonic Brown mashed a home run and a triple before two innings were complete, and Cliff Lee took it from there, slicing up a formidable Brewers lineup with the skill of a surgeon and the elan of a Japanese steakhouse server. It looked for all the world like Lee would maintain his perfect record stopping Phillies losing streaks, with the only faint drama whether Brown would get the double he needed to finish the cycle.

Then a charming Sunday drive became a Jeep rumble through a minefield, as Lee ran out of gas in the 8th and the bullpen did the pyro thing, to the point that the Brewers had the tying runs on base with no outs in the ninth against third-string closer Antonio Bastardo. But with the prospect of a soul-crushing loss looming, Bastardo notched the last three outs and the Phils hung on for a 7-5 win.

The first two innings might have represented the Phillies' best baseball of the season. Sparkling defense from Freddy Galvis and Jimmy Rollins, against blazing hot Brewers catcher Jonathan Lucroy, saved a run in the top of the first, then with two outs in the home half, the Phillies posted five runs against Brewers starter Mike Fiers--an almost unprecedented case of the Phillies recognizing a mediocre pitcher and treating him that way. Rollins started things with a double inside the first-base bag, and Ryan Howard drew a walk. Brown stepped up, got ahead in the count 3-1, then crushed a Fiers offering into the right field stands. John Mayberry followed with a single and came around on an Erik Kratz double. Galvis capped the rally with a triple off the right field wall.

After Lee struck out the side in the second, the Phillies knocked out Fiers as Ben Revere reached on an error, stole second, moved to third on a Rollins single, and scored on Howard's sacrifice fly. Brown followed with a triple just under the glove of sliding right fielder Norichika Aoki, and the lead was a touchdown. Lee held the score right there for nearly six innings more, going right at the Brewers with the big lead. Aggressive and precise, he registered his tenth strikeout on his 81st pitch.

And then the eighth inning came. Mild concern arose when the Brewers started the inning with consecutive singles, but a Logan Schafer double play left a man at third with two outs. Aoki worked the count full against Lee--the first three-ball count of his day--then singled to plate Milwaukee's first run. After Carlos Gomez followed with a single, Lee gave way to Justin De Fratus, who walked pinch-hitter Aramis Ramirez. DeFratus got ahead of Lucroy 1-2, but the certified Phillie-killer fouled off several pitches before blasting what appeared to be a grand slam just fair down the left-field line. Replay showed, however, that the ball bounced off the top of the fence. After a long delay for replay, the umps emerged to rule the play a bases-clearing triple. DeFratus induced a lineout from Yuniesky Betancourt to hold the score at 7-4.

As the Phillies completed 6 1/3 innings of scorelessness against the Milwaukee bullpen, it became clear that Jonathan Papelbon wouldn't be coming out for the ninth inning. Nor was Mike Adams available. Instead, it would be Bastardo against three righty hitters. Alex Gonzalez led off with a soft fly to center on which Ben Revere, rapidly approaching Mini-Mart status in my personal pantheon of Ugh, That Guy, took a step back before vainly coming in: leadoff single. Rickie Weeks walked as Bastardo struggled with command, and Jason Bianchi made it 7-5 with a single over Galvis at third. Pinch-hitter Jean Segura grounded sharply to Ryan Howard at first, and the big guy hobbled to the bag for the sure out rather than risking an airmail delivery to Brown in left: one out, two men in scoring position. But Bastardo retired Aoki on a popup to left, then after an intentional walk to Gomez, ended things on a first-pitch flyout from .172-hitting Martin Maldonado... batting in the spot vacated a few innings earlier by perennial all-star Ryan Braun, who'd been lifted when the game was a laugher. Thanks, Ron Roenicke. 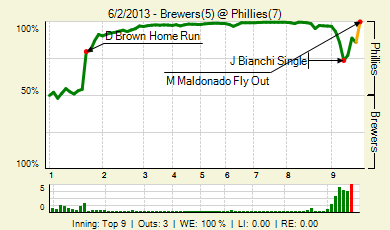