The Mets have two very good young starting pitchers. And that's really it. No bullpen, little offense, and no defense. But it's a start. Also, Jimmy Rollins is only four away from becoming the Phils' all-time leader in doubles. And the Phils have the best record in the NL East over the past 2 months. 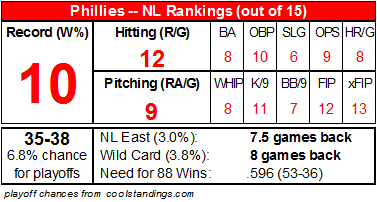 That, along with the Braves' 7.5-game lead over the Phils, translates to only a 6.8% chance of making the playoffs, according to coolstandings.com. That will be a key number to keep an eye on in the weeks leading up to the July 31st trade deadline.

On the bright side, these are the NL East's records since April 19th:

So the Phillies haven't lost any ground in the last two months, but they haven't dug out of their early season hole, either, and time is running out for that.

- Phillies Hitters vs. Projections
- Phillies Team Stats vs. 2012 and vs. the Mets
- NL Standings and team stats
- Upcoming Milestones 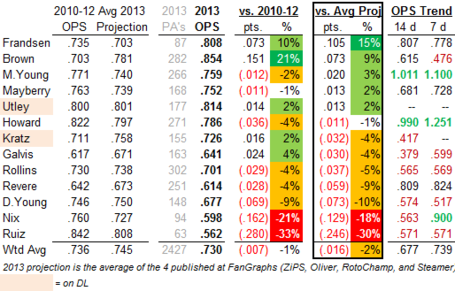 Ryan Howard has had a good last week despite his 0-4 against lefty Gio Gonzalez on Wednesday. He and Michael Young have been the lone bright spots recently.

Speaking of Howard and lefties, his last effective year against LHPs was 2010, when he hit .264/.333/.492 (.826 OPS) against them. In the 2.5 years since then, he has managed only .204/.262/.353 (.615 OPS). We all would like for Howard to face fewer lefties, particularly relievers, but there appears to be quite a bit of reluctance to have star players sit out, even when it's clear it would help the team in those games. Below are some notable hitters who have done as bad or worse vs. LHPs since 2011, but continue to play against them:

The Mets are worse than the Phils in most key offensive categories, but not in the only one that really counts -- runs scored. I thought this might be due to differences in hitting with runners in scoring position, but the Mets are worse in that area as well: 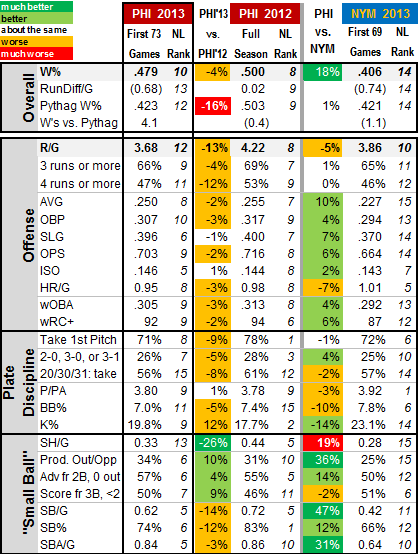 Twenty-four year old Matt Harvey, in his second season in the majors, has a 6-1 record, with a 2.16 ERA, 2.03 FIP, and 2.71 xFIP so far. He has already racked up 3.7 fWAR, and is a leading candidate for the Cy Young award (although we've seen that fortunes can change quickly from the first half to the second). He is scheduled to face John Lannan on Sunday.

In addition, 23-year old Zack Wheeler, acquired in the 2011 trade deadline deal that sent Carlos Beltran to the Giants (a best case scenario for many 2013 Phillies fans), looked good in his first major league start on Tuesday, pitching 6 scoreless innings and giving up only 4 hits while striking out 7, although he did walk 5. He had a 3.93 ERA and 4.04 FIP in AAA before being called up, with 9.57 K/9 and 3.54 BB/9. The Phils will miss him this time. 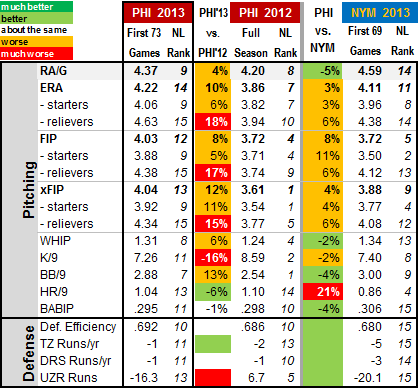 Which team's position players lead the NL in fWAR?

The Phillies' next opponent, starting Monday -- the San Diego Padres. 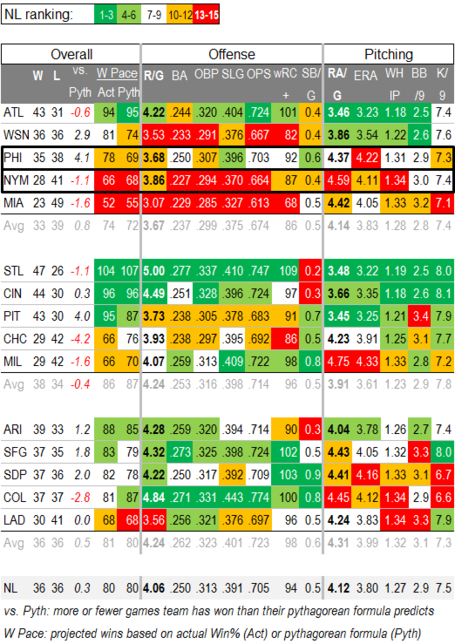 Jimmy Rollins
- His next stolen base (8th of the season) will tie him with Ed Delahanty for 2nd on the Phillies all-time list, at 411. The 19th century's Billy Hamilton, who holds the Phillies record with 508, will survive the Rollins era as the team's all-time leader.
- Rollins is sitting at 995 career strikeouts, and 5 more will make him the 7th Phillie in history to K 1,000 times.
- He needs 4 more doubles (21 total) to tie Delahanty as the Phillies' all-time leader, with 442.
- He also needs 3 more home runs to reach 200 for his career, becoming the 10th Phillie to do so. That will make Rollins just the 9th player (and only shortstop) in MLB history to have 2,000 hits, 400 stolen bases, and 200 home runs.