A game that pretty much went like you'd expect

There wasn’t a ton of hope going into this one. Mets ace Matt Harvey already had asserted his dominance over the Phillies in his short career, and it's only a small consolation that he's really good against everyone else too--comparable to Tom Seaver and Dwight Gooden good, in fact. Against him went John Lannan, a pitcher who needs, and deserves, no further description. In such a situation, particularly when your team kind of sucks to start with, all one can hope for is a loss with dignity.

But if the 2013 Phillies have a great talent, it lies in the field of disappointing one’s hopes, and today’s game was no different. The Mets got the only run they'd need in the first, when Lannan surrendered back to back hits to Eric Young, Jr. and David Murphy and Marlon Byrd brought Young home on a sac fly two batters later. Harvey immediately showed his stuff, setting down Jimmy Rollins, Chase Utley and Michael Young on 11 pitches that included his high-90s heat and filthy breaking stuff.

Lannan actually pitched well over the next three innings, striking out the side in the second and inducing double play balls to end the third and fourth. Ryan Howard, who'd entered the game with five strikeouts in five at-bats against Harvey, ended the no-hitter drama (the Mets phenom has taken two into the seventh inning this season) leading off the second. But after falling behind Domonic Brown 3-1, Harvey blew away the defending NL Player of the Month with two fastballs, and cruised through the next five Phillies hitters.

The game turned in about a ten minute stretch through the bottom of the fourth and top of the fifth. Still down just 1-0, the Phillies had a great opportunity when Utley doubled to lead off the inning. Young moved him to third with a groundout, and Howard walked. But Harvey struck out Brown again, and Delmon Young avoided yet another double play only because there were already two outs when he hit his accustomed grounder to short.

Juan Lagares led off the fifth with what seemed to be a flyout to center. But the ball popped out of Ben Revere's glove as he got ready to throw it back in, and umpire D.J. Reyburn chose to rule this an error as Lagares raced to third. Lannan retired Omar Quintanilla on a groundout and got ahead of Harvey 1-2. But a rule of the 2013 Phillies’ moral universe is that any opposing runner who reaches on an error MUST come around to score, and so Lannan laid in a knee high fastball that his opposite number belted to the gap for a run-scoring double. Two more doubles followed, including one by Young Jr. for what I believe was his 83rd hit of the series, and it was 4-0.

The Mets added two more the next inning after Lannan walked the first two batters. Later, it rained, and J.C. Ramirez made his major league debut by striking out the side. David Wright homered and tripled somewhere in there. And, well, you know. You've seen 76 games of this stuff now, and it's all starting to smell pretty much the same, isn't it? 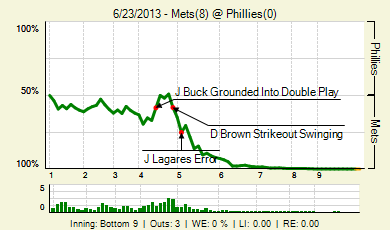