Phillies Stat Notes: Compared to last year and to the Padres

Phillies team stats compared to last year and to the Padres. San Diego has very good hitting (although it's masked by Petco field) and terrible pitching (although it's made to look better by Petco). Rollins 4 doubles away from tying as Phils' all-time leader.

Share All sharing options for: Phillies Stat Notes: Compared to last year and to the Padres 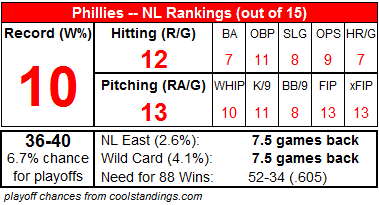 The Phillies need to play at a 98-win pace (.605 winning percentage) to reach 88 wins and be in contention for the second wildcard. But if Atlanta and Washington keep playing like they have recently, it would take fewer than 88 wins to capture the NL East flag.

- Phillies Hitters vs. Projections
- Phillies Team Stats vs. 2012 and vs. the Padres
- NL Standings and team stats
- Upcoming Milestones 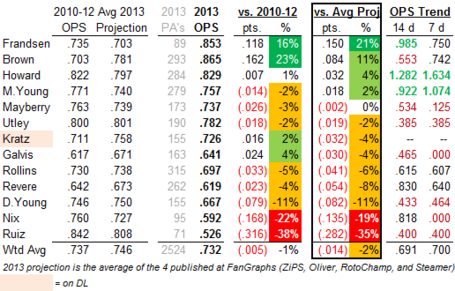 It's still only 71 plate appearances sandwiched around a DL stint, but it might be time to start worrying about Chooch.

Phillies Team Stats vs. 2012 and vs. the Padres

San Diego is only 6th in scoring, and 8th in wOBA, but adjusting for their pitching-friendly home park, they have the second best wRC+ in the NL.

Stolen base attempts, as well as success rate and steals, are now all 5th in the NL. The Padres are leading the league in stolen bases. 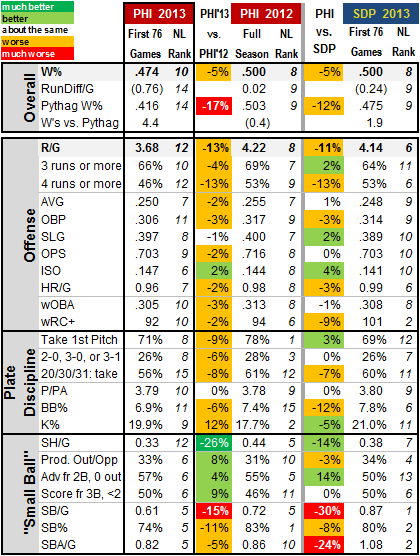 Adjusting for Petco, San Diego has the NL's highest ERA- and FIP-. 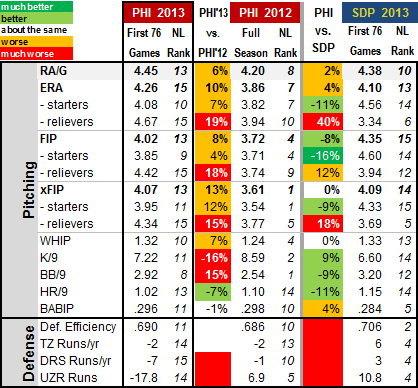 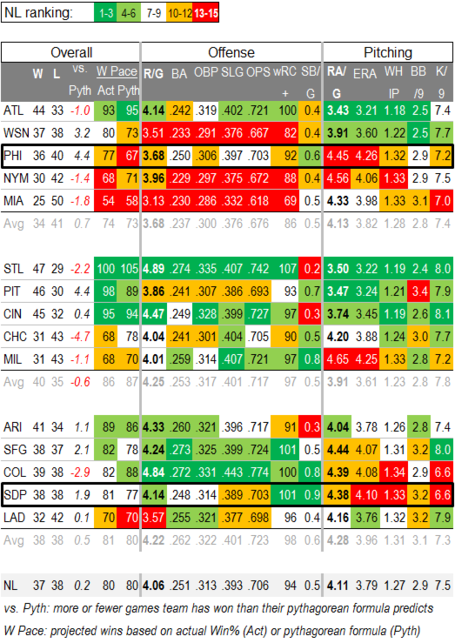 Jimmy Rollins
- His next stolen base (8th of the season) will tie him with Ed Delahanty for 2nd on the Phillies all-time list, at 411. The 19th century's Billy Hamilton, who holds the Phillies record with 508, will survive the Rollins era as the team's all-time leader.
- Rollins is sitting at 998 career strikeouts, and 2 more will make him the 7th Phillie in history to K 1,000 times.
- He needs 4 more doubles (21 total) to tie Delahanty as the Phillies' all-time leader, with 442.
- He also needs 3 more home runs to reach 200 for his career, becoming the 10th Phillie to do so. That will make Rollins just the 9th player (and only shortstop) in MLB history to have 2,000 hits, 400 stolen bases, and 200 home runs.

Not so Cute: Stutes to DL, Aumont Recalled

Explaining Dom Brown's Contract to a 7 Year Old . . . Along With Other Mysteries of Baseball Economics