Phillies with the best record in the NL East since April 19th, but playoff chances remain under 7%. Utley now 20th in MLB history in getting hit by a pitch.

Records in the 2+ months since April 19th (latching onto any good news):

- Phillies Hitters vs. Projections
- Phillies Team Stats vs. 2012 and vs. the Dodgers
- NL Standings and team stats
- Upcoming Milestones 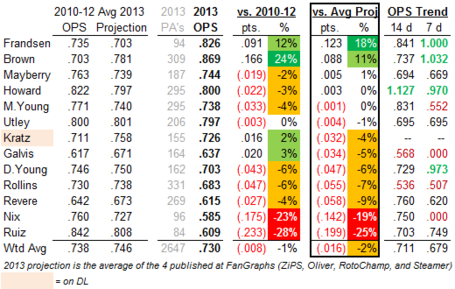 Chooch is showing signs of getting comfortable. And Dom Brown with a good last week.

Phillies Team Stats vs. 2012 and vs. the Dodgers

Solo Home Runs: Top three in the NL in solo home runs as % of all home runs:

Double Plays: The Phillies have grounded into double plays in 13.7% of their opportunities, 2nd highest in the NL. Only Miami with 14.0% is higher.

Men on 3rd, less than 2 out: just noting it because it's kind of surprising given some very frustrating failures, but the Phils are right at the NL average of 50%, and rank 7th out of 15.

Plate Discipline: The Dodgers rank highly in all of the plate discipline stats: taking the first pitch, getting to a hitter's count, and then being patient in those counts. So they see a lot of pitches, and walk at an above average rate. 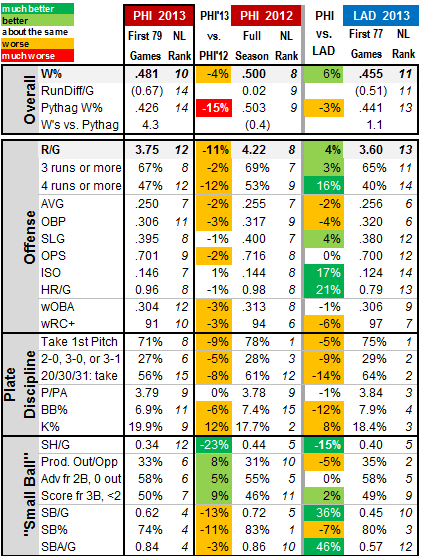 Bullpen: The Phillies' rankings are all in agreement: bullpen ERA, FIP, and xFIP are all dead last. 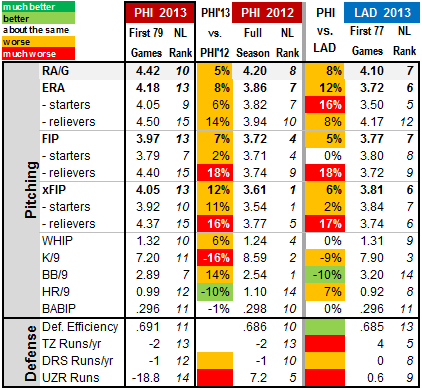 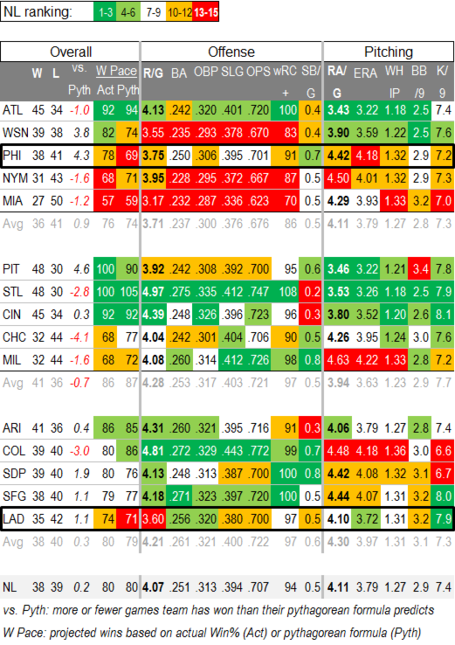 Jimmy Rollins
- His steal on Tuesday was the 411th of his career, tying him with Ed Delahanty for 2nd most in Phillies history. Billy Hamilton (1890-95), remains the Phils' all-time leader and is beyond Rollins' reach.
- Rollins is sitting at 998 career strikeouts, and 2 more will make him the 7th Phillie in history to K 1,000 times. He's also 7th in Phils history in walks.
- He needs 4 more doubles (21 total) to tie Delahanty as the Phillies' all-time leader, with 442.
- He also needs 3 more home runs to reach 200 for his career, becoming the 10th Phillie to do so. That will make Rollins just the 9th player (and only shortstop) in MLB history to have 2,000 hits, 400 stolen bases, and 200 home runs.

Chase Utley
- Utley's HBP in the 13th inning last night was the 153rd of his career and tied him with Hall of Fame outfielder Fred Clarke for 20th place all-time.
- His next one (3rd this year) will tie Brady Anderson for 19th all-time.

Raul Ibanez Update
No one in baseball history has hit 30 home runs in a season when they were 41 (or older). Ibanez hit is 18th last night, and is on pace for 37.

Also from The Good Phight: