Domonic Brown has a good shot at a second straight Player of the Week award, and possibly even Player of the Month. Also, how real is the Phillies June Swoon?

Many of the hitting stats moved towards the league's median, and there is even one -- HR/G -- that's slightly above the middle.

- Brown: 12 homers in May
- Player of the Week and the Month Candidates
- June Swoon?
- Phillies Hitters vs. Projections
- Phillies Team Stats vs. 2012 and vs. Marlins
- NL Standings and team stats
- Milestones

Domonic Brown: 12 homers in May

We reviewed in Friday's Stat Notes how Domonic Brown became just the 17th Phillie to hit 10 home runs in a month, and that it was the 45th time in total that it had been accomplished.

Of course Friday night was still part of May, and Brown hit two more, which made him the 8th Phillie to hit 12 in a month, and the first since August 2006:

Player of the Week Candidates

These are the contenders in the NL, using the stats that seem to be important to MLB:

Not giving it to Brown for the second week in a row would be a surprise.

Player of the Month Candidates

The Phillies' tendency to struggle in June is a matter of lore, and as shown in the table below, June has in fact been the Phillies' toughest month. It so happens that June is also the month when they've played the majority of their interleague games in recent years. However even if you focus on just their games within the league, June is still the worst, trailing even April by a small margin. However the biggest factor seems to be interleague play:

Looking at the past six years more closely, June has been the Phillies' worst month by winning percentage in four of those six years: 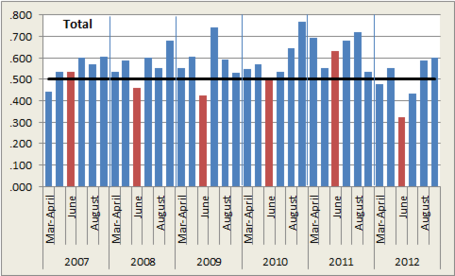 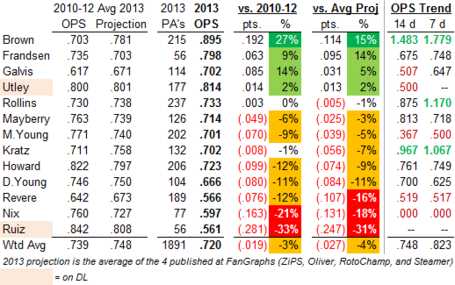 Phillies Team Stats vs. 2012 and vs. Marlins

And, surprisingly, they're 5th in scoring runners from 3rd with less than two out. 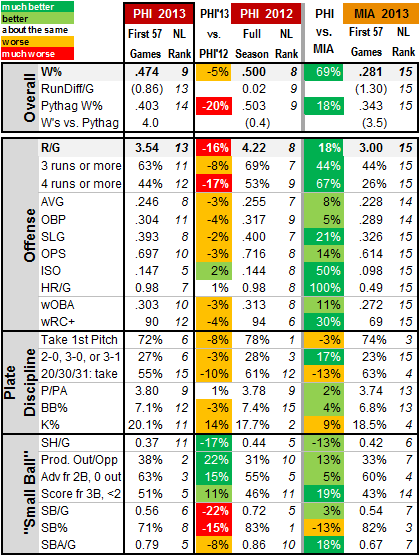 In short, Phillies starters have been bad overall, and the bullpen has been worse. One odd note though: the Phillies lead the NL (and all MLB) in quality starts. The problem has been that they've been barely meeting the minimum for the QS criteria (6 IP, 3 ER or less). 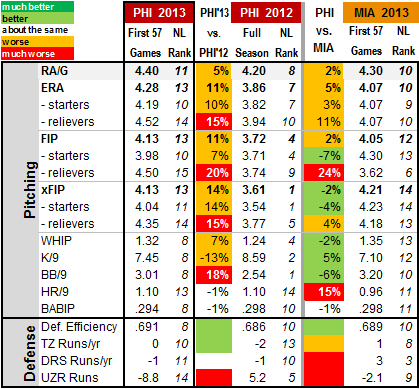 Offenses in the NL East are just brutal, with the exception of Atlanta. Even with the Braves included, the average wRC+ in the division is 86, compared to 97 and 99 in the Central and West, respectively. 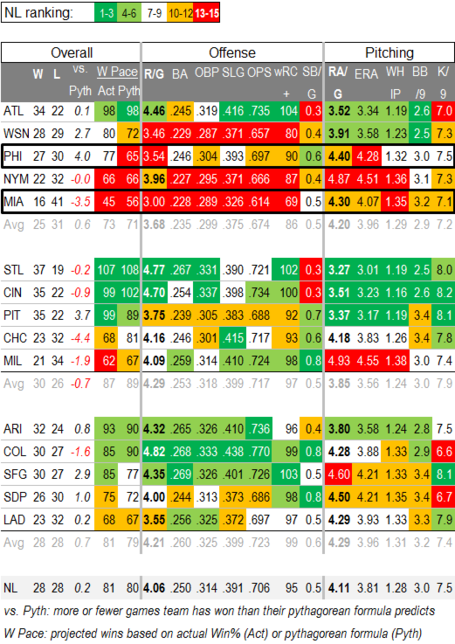 Jimmy Rollins
- Rollins needs two more RBIs (21 for the year) to tie Bobby Abreu for 9th most in Phils history, with 814.
- Three more stolen bases (8 total) will tie him with Ed Delahanty for 2nd on the Phillies all-time list, at 411. The 19th century's Billy Hamilton, who holds the Phillies record with 508, will probably not be caught.
- He also needs 3 more home runs to reach 200 for his career, becoming the 10th Phillie to do so. That will make Rollins just the 9th player (and only shortstop) in MLB history to have 2,000 hits, 400 stolen bases, and 200 home runs.

Ryan Howard
- Two more extra base hits (22 this year) will tie him with early twentieth century outfielder Sherry Magee for 7th most in Phils history, at 539.
- His Sac Fly yesterday tied Pat Burrell for 10th most on the Phils with 42. The next one (5th this year) will tie Von Hayes, Bob Boone, and Mike Lieberthal for 7th most.