Comparing Phillies' team stats to last year, and to the Brewers. Upcoming milestones for Rollins, Howard, and Hamels.

- Phillies Hitters vs. Projections
- Phillies Team Stats vs. 2012 and vs. the Brewers
- NL Standings and team stats
- Upcoming Milestones 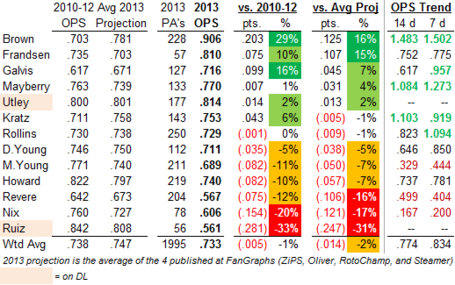 Ben Revere
It's great to see a lot of green in those far right columns, but Ben Revere has cooled off again. By month:

Ahh the good old days, when .712 OPS was the down month for the Phillies centerfielder.

Michael Young
Young, meanwhile is hitting essentially the same overall as in 2012, although his mix of on-base and power has changed. He is however playing half his games in a much less hitter-friendly park this year, so his park-adjusted wRC+, while below average, is still respectable:

Phillies Team Stats vs. 2012 and vs. the Brewers

Thanks mostly to Dom Brown, they are now 4th in both home runs per game and Isolated Power, which have helped push slugging percentage to 6th best. 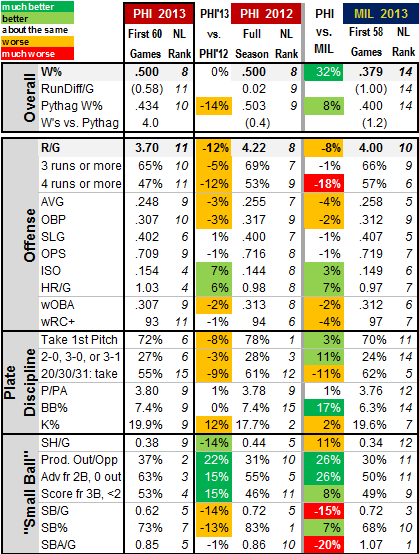 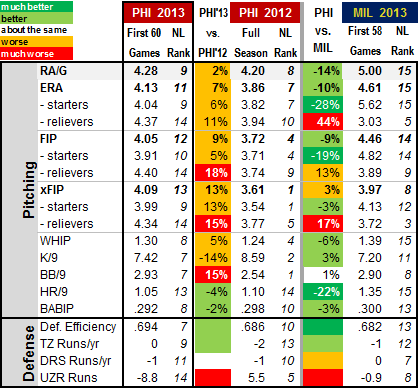 Not only are the Phils and Nationals only a half game apart in the standings, they also have very similar run differentials and pythagorean records, and have won about 4 games more than the pythagorean formula would predict: 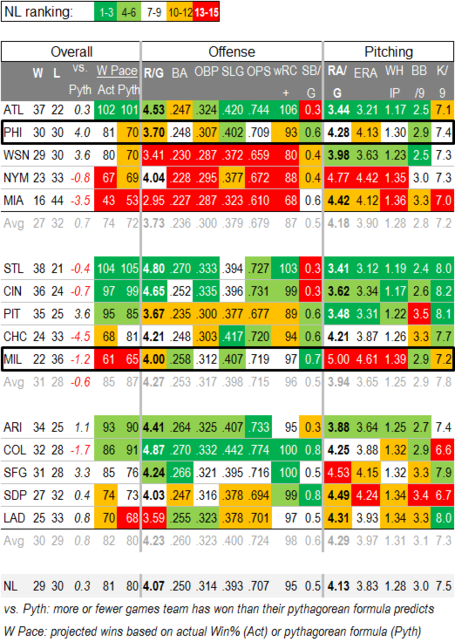 Jimmy Rollins
- Rollins' next RBI (21st this year) will tie Bobby Abreu for 9th most in Phils history, with 814.
- Two more stolen bases (8 total) will tie him with Ed Delahanty for 2nd on the Phillies all-time list, at 411. The 19th century's Billy Hamilton, who holds the Phillies record with 508, will probably not be caught.
- He also needs 3 more home runs to reach 200 for his career, becoming the 10th Phillie to do so. That will make Rollins just the 9th player (and only shortstop) in MLB history to have 2,000 hits, 400 stolen bases, and 200 home runs.