It was a beautiful late-spring Sunday afternoon. Unless you watched this game.

I’ll admit the Phillies kind of had me going after that five-game win streak. The team looked resilient, playing winning ball despite a bad run of injuries. The pitching suddenly looked pretty good, particularly the rotation. An exciting young star, Domonic Brown, put them on his back with a two-week stretch of awesomeness the likes of which the Phils hadn’t seen since Ryan Howard’s salad days. They nosed over .500 and passed the struggling Nationals, and the conversation began to shift from "when will they sell?" to "who might they buy?"

Then Cliff Lee blew a 4-0 lead Friday night, the offense resumed the futility that was its norm for most of the first two months, and the weekend ended with three straight losses to a Brewers team that’s been terrible against everyone other than the Phillies.

Unlike the first two, there was no agonizing what-if aspect to this one: Milwaukee straight-up ass-kicked the Phils to finish their season series with five wins in seven games. Nor did it take long. The Phillies failed to score despite three first inning hits, as Jimmy Rollins popped up a 3-1 meatball with men on first and second and no outs, then Norichiki Aoki threw out Michael Young at the plate on Ryan Howard’s single—a questionable send by third base coach Ryne Sandberg with Brown coming up next. They wouldn’t get another hit until the eighth.

Jonathan Pettibone got himself into trouble in the bottom of the second, failing to field a Carlos Gomez leadoff bunt. Yuniesky Betancourt followed with a hard grounder to the left side that a third baseman with range likely would have converted into a 5-4-3 double play; Michael Young is not that man, and the Brewers had men on first and second with no outs. Pettibone got ahead of .161-hitting catcher Martin Maldonado 0-2, then hit him with a pitch to load the bases. Juan Francisco knocked in Milwaukee’s first run with a groundout to first, then the .100-hitting #8 hitter, Scooter Gennett—if that IS his real name—tripled to the gap in right, plating two more. Lohse followed with a perfect safety squeeze, and it was 4-0.

Lohse really didn’t look good through the first few innings. Staked to his big lead, he promptly walked Pettibone to start the third inning. But Young, perhaps feeling the need to carry the full burden of namesake sucking with Delmon Young on the bench today, promptly grounded into what my unofficial count has as his 968th double play of the season. Thus went the Phillies’ last base runner until the eighth, as batter after batter went down on weak contact early in counts. No reason you’d want to work a pitcher after they’d used their entire bullpen in the previous three games, after all.

The rest is noise. Pettibone avoided further damage until the sixth, when Gomez got him for a two-run homer; the following inning, Jeremy Horst and Justin De Fratus allowed for two more runs, making it 8-0. The Phillies avoided the shutout when Humberto Quintero, your new starting catcher, reached Lohse for a solo homer; the Brewers got it back when Maldonado launched Jonathan Papelbon’s first pitch into the bullpen. Glad Pap got his work in today rather than in the tie-game ninth Friday night. All hail The Book! 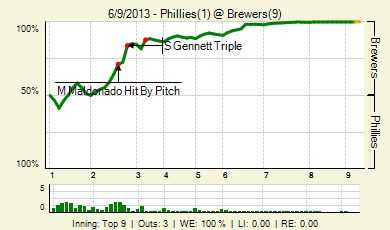