The Phillies lead the NL in Quality Starts, but are only 11th in team ERA. So the starters have been excellent and the bullpen has been awful. Right?

Share All sharing options for: Arbitrary thresholds and the Phillies' Quality Starts

A Quality Start is defined as when a starting pitcher throws at least 6 innings, and gives up no more than 3 earned runs. Not only do the Phillies lead the NL in this stat, but they also lead all MLB. Detroit has a slightly higher percentage of starts that are QS's, 63.7% to 63.4%, but the other 28 teams are lower than the Phils in that category as well.

This has sometimes been held up in recent weeks, along with the Phillies' pedestrian overall ERA (5th highest in the NL) as evidence that their starting pitching has been excellent, while virtually all of the blame for the high team ERA belongs to the bullpen. And the Phils' relief corps have in fact been terrible -- there is no getting around that: highest ERA in the NL by far (4.58 vs. next highest at 4.17). In addition, the defense-independent pitching metrics confirm this assessment of the bullpen -- it ranks 14th in FIP, xFIP, and SIERA (just ahead of the Cubs in each case) -- but this article is focused on ERA since earned runs allowed is what QS's are based on.

Unfortunately the Phillies' lead in Quality Starts, as yolacrary has already pointed out, is misleading to say the least, and that can happen with stats that are based on an arbitrary cutoff (or, as in this case, two arbitrary cutoffs).

Phillies starting pitchers as a whole have essentially been average at best so far this year:

So how do we reconcile the starters being worse than average in ERA, and yet somehow racking up the most Quality Starts?

Phillies starters not only have the highest ERA in non-quality starts (thanks to the many times they've been blown out), they also have the second highest ERA in Quality Starts: 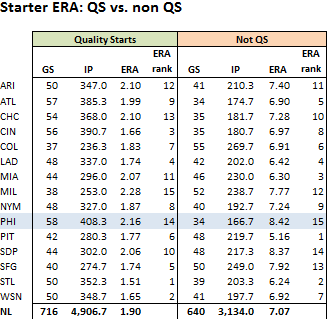 Looking at Quality Starts in particular, Phils starters are near the bottom in the number of starts where they've given up 0 runs or 1 run, and near the top in giving up 2 runs and 3 runs. In fact, if you combine the 0-1 numbers, and the 2-3 numbers, they are last in giving up 0 or 1, and first in giving up 2 or 3. In other words, they have the lowest-quality Quality Starts in the NL. For reference, St. Louis is at the other end, with the highest percentage of QS's where starters have given up 0 or 1. 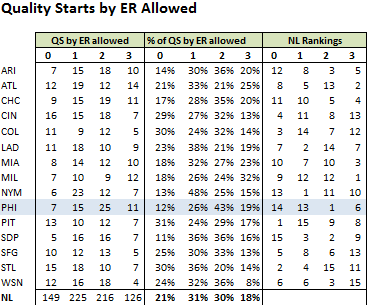 Additionally, with more of the Phillies' starts qualifying as QS's, the remainder of their starts also look worse than average. For the average NL team, 38% of the starts that don't meet the QS criteria are starts where no more than 3 earned runs are given up, but they don't qualify as a QS simply because they don't reach the 6-inning minimum. For the Phillies, only about half of that percentage (21%, or 7 of 34), of their non-QS starts are this type of low-run but low-inning variety. 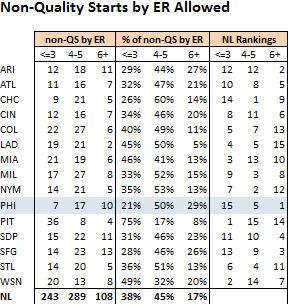 So yeah -- QS is a somewhat interesting stat, but is of very limited value in telling us which starting rotations are actually performing the best.