Ben Revere has the most hits in MLB over the last 30 days, and is even 16th in WAR in that time. Also, the Phils have the 2nd highest OPS in the NL over the last two months. 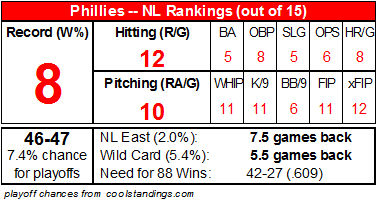 There are suddenly lots of better-than-average numbers among the offensive rankings.

And they've moved to within 5.5 games of the 2nd wild card team, although that hasn't moved the needle much on their playoff chances: still only 5.4% for the wildcard, and 7.4% overall. 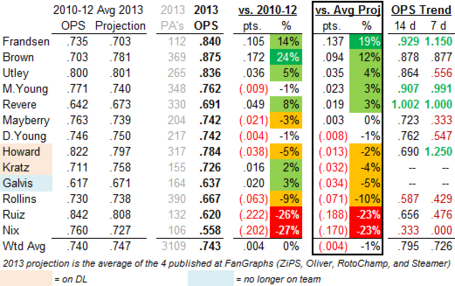 As mentioned above, the Phils are suddenly looking at least average in some offensive categories.

In fact in the 61 games since May 6th (to pick the date that makes them look best), they have the... 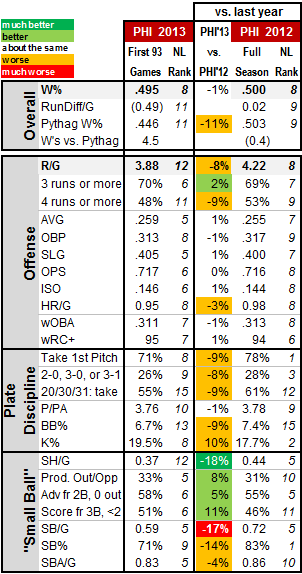 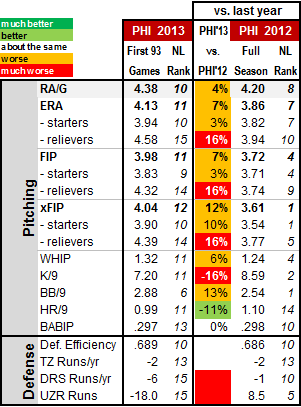 They have been one of the worst-hitting teams in the AL, with the lowest park-adjusted wRC+, at 81.

Their pitching, on the other hand, has been at least middle-of-the-pack, ranking 8th, 6th, and 8th in ERA, FIP, and xFIP respectively. 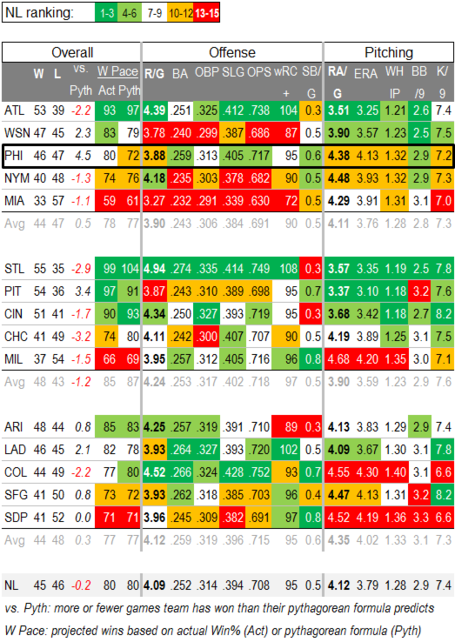 Jimmy Rollins- Rollins' last stolen base, on Monday, was the 412th of Rollins' career, and moved him past Ed Delahanty for 2nd most in Phillies history.- He needs 3 more doubles (21 total) to tie Delahanty as the Phillies' all-time leader, with 442.- 4 more RBIs (34 this year) will tie Pat Burrell for 8th most in Phils history at 827.- He also needs 3 more home runs to reach 200 for his career, becoming the 10th Phillie to do so. That will make Rollins just the 9th player (and only shortstop) in MLB history to have 2,000 hits, 400 stolen bases, and 200 home runs.

Chase Utley- With his double yesterday, Utley moved past Richie Ashburn for 8th most in Phillies history, with 288.
- He needs two more extra base hits to tie Sherry Magee (1904-14) for 8th in Phils history, at 539.- Utley's next HBP (3rd this year) will tie Brady Anderson for 19th all-time, at 154.

Just for giggles, Kyle Kendrick now has the 32nd most wins in Phillies history.