After playing 34 innings in about 26 hours, the Phillies emerge from the first half with a series win over the White Sox, a .500 record, and postseason dreams bruised but intact.

Just as the first few games of the season take on exaggerated importance in the mind of the fan, so too the final games before the all star break. In this case, though, it's kind of understandable: the Phillies came into Sunday's game with eight wins in their last twelve games, even as they lost their cleanup and leadoff hitters to injury and contenders circled like crows over the veteran remnants of the 2008 championship club. A win Sunday would mean taking a .500 record into four days of rest; a loss would mean that in 14 chances to break even this year, they'd lost 11, and further confirm the 2013 Phillies as mere aspirants to mediocrity.

The first six innings of the rubber game against the White Sox offered solid grounds for faith. The Phils took a quick 2-0 lead on a Domonic Brown's first-inning double against impressive Chicago lefty Jose Quintana. Cole Hamels was dominant on the mound and stout at the plate, driving in the team's third run with a two-out single in the fourth. The Sox looked for all the world like a beaten team content to play out the last game before the all-star break, jump on the plane and lick their wounds for a few days.

Then it slowly went to crap, and doubt crept in. Three hits to begin the seventh plated one Chicago run and put runners at the corners, though Hamels held the lead at 3-1 on a strikeout and a double play--one of four the Phils turned on the afternoon. Hamels then led off the bottom of the inning with a standup double... and stood out there in the heat as his lineup couldn't even get him to third. Inexplicably effective former Marlin Alejandro De Aza cut the lead to a run with a solo homer in the top of the eighth. And with the inevitability of a fart joke in a Seth MacFarlane vehicle, Jonathan Papelbon surrendered the tying run with two outs in the ninth on a Josh Phegley single.

Not quite 24 hours earlier, the Phillies lost an extra-inning game they'd led for most of the afternoon, in which they twice had the winning run at third with less than two outs. In the last inning of that game, they also lost Ben Revere, arguably their best player over the last six weeks, to a broken foot--all against a last-place team with no remaining illusions of relevance in 2013. Even after winning the nightcap in 13, another come-from-ahead defeat would have occasioned a long and toxic few days before the season resumed.

The bottom of the 10th boiled down the good and bad of these first 96 games into a few minutes of coiled tension and, finally, sweet relief. Chase Utley led off with a double to the gap in left. After an intentional walk to Jimmy Rollins, a nubber in front of the plate from Brown put the winning run at third with one out. Another IBB loaded the bases and brought in hard-throwing Ramon Trancoso, who'd struck out Delmon Young with the winning run on third and one out a day earlier. He did it again Sunday, and we braced ourselves--until John Mayberry, Jr., now manning center for Revere, took Trancoso's first pitch up the middle for the game-winner.

While big league ballparks will go quiet for the next few days, The Good Phight will be busy with comprehensive first-half reviews as well as all-star coverage. Meanwhile, behold the Fangraph of High Hopes: 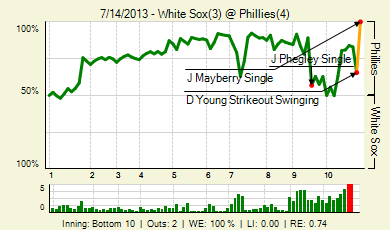