Phillies named to the All-Star team since 1970, summaries by position, and the relationship between winning and representatives.

For an All-Star themed blast from the past, the table below shows all Phillies named to the All Star Game since 1970. There are names here most of us haven't thought about in a while, and which many of us have probably never heard of before. Doug Jones? Heathcliff Slocumb? Wayne Twitchell? 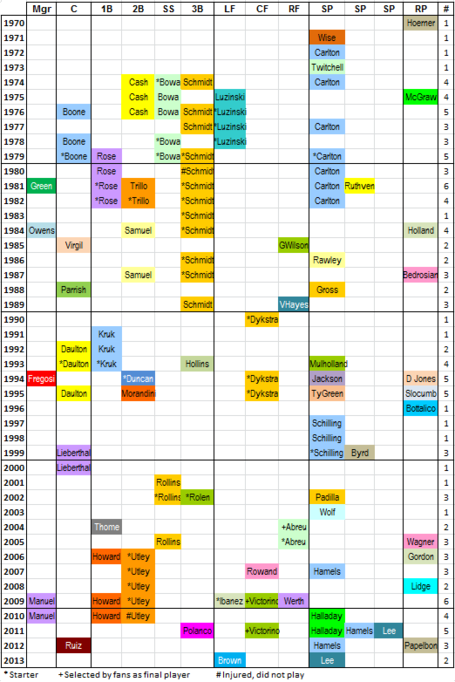 And summarized by position, with some key names highlighted: 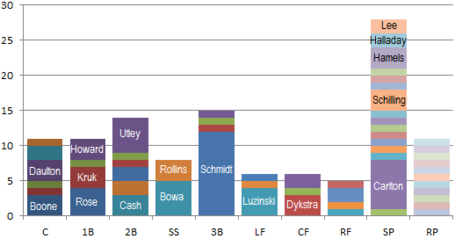 Aside from starting pitcher, the position most represented since 1970 has been third base, and that's due almost entirely to Michael Jack Schmidt.

Pete Rose, despite having some forgettable seasons in Philadelphla, is the first baseman that has appeared most often, more than either John Kruk or Ryan Howard.

Garry Maddox never made an All-Star team -- not even in 1976 when he finished 5th in the MVP voting. Then of course Jimmy Rollins didn't make it in his MVP year, or the year after that when there might have been some residual effect. Pat Burrell never made it, either.

Eleven different Phillies relief pitchers have been named to the ASG, each of them only once.

All Stars vs. Winning Percentage

One would think that the number of All-Stars a team has in a given year would correspond roughly to its winning percentage. Looking at it by year, it's clear there is some relationship between the Phillies' record and the number of representatives:

The relationship is clearer when we smooth out the lines by looking at 5-year averages. Each point below represents the average number of all-stars over the past 5 years, and the average winning percentage in that time:

Phillies' Hitting Success in the ASG (or Lack Thereof)

Phillies hitters have certainly had some success throughout the history of the All-Star Game, including Johnny Callison's home run in 1964, and some key hits in the 1970s. They just haven't done much recently. As in the last 33 years.

Phillies' Pitching in the ASG

Phillies pitchers, on the other hand, have done quite well in recent decades: