Chris Davis' home run rate in the first half was one of the best in recent memory. But it's neither unheard of among very good home run hitters, nor out of place in Davis' own past performance.

This is how Chris Davis' first half of 2013 is being described.

He has hit 37 home runs so far, which is the 2nd highest total ever by the All-Star Break, behind only Barry Bonds' 39 in 2001, and this apparently suspicious display of power has many fans, and even some less than scrupulous writers, up in arms. 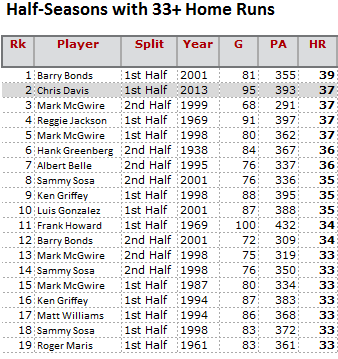 What's not getting as much attention is that Davis has hit those home runs in 393 plate appearances, or 1 every 10.6 PAs.

A quick search of the top 300 half-seasons in home runs (basically those seasons with 24 or more HRs either before or after the All-Star Break) shows that only 25 of those 300 half-seasons had more than Davis' 393 PAs.

In addition, these have been a little higher, but in the same ballpark: 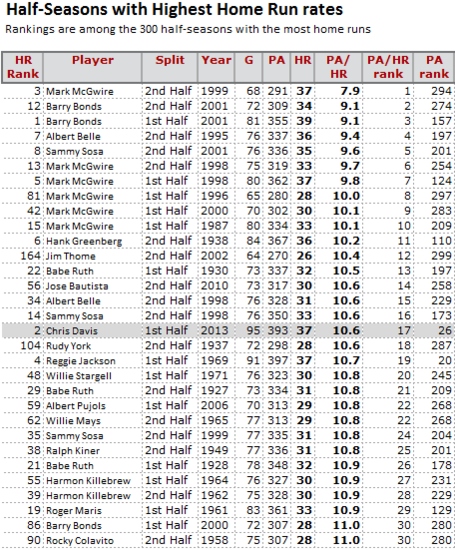 And that's only looking at half-seasons, without considering any streaks that spanned the All-Star break and consequently didn't cause either half to reach the 24-home run minimum necessary for this review.

So the 10.6 is certainly an impressive rate, but a number of great home run hitters have matched it for a half-season.

In addition, Davis himself has had similar streaks:

If we think of his first half as another one of his streaks, his career so far looks consistent, and the current streak has brought his major league numbers more in line with his stats in the minors:

Finally, while he's on pace for 62 home runs for the full year, maintaining his 1st half home run rate would be very unusual. There are 36 players who have hit 30 or more home runs in the first half, and those players' home run rates slowed by an average of 24% in the second half, from 1 per 11.5 PAs to 1 per 15.1. 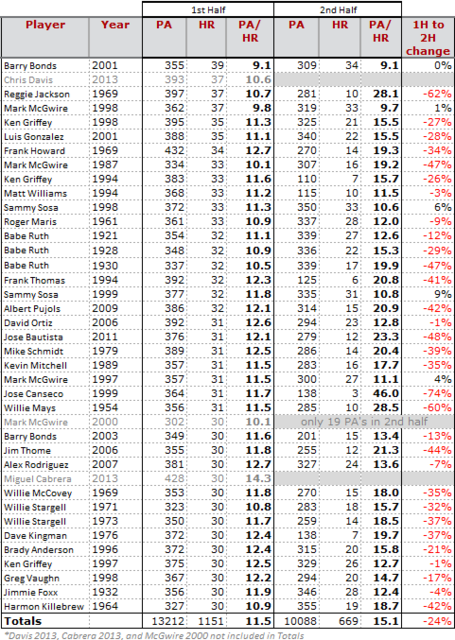 Even with a drop-off in his HR rate in the second half, Davis will almost certainly wind up with over 50 home runs, and very possibly over 60. Below are some scenarios, from an increase in his home run rate, to one of the steeper declines in the above table, and what each would mean to his final year totals. All of which assumes, of course, that he remains healthy for the rest of the year:

And there is no denying that he has had one fantastic half of baseball, in fact one of the best in recent memory. But he's hitting home runs at a rate that is neither unheard of in the annals of baseball, nor out of place in Davis' own past performance.