This is one of my most prized possessions. I want something similar for the 2008 team. Can you help?

Another day without meaningful baseball. Please, make it stop!

In the meantime, maybe you can help me. As a kid, I used to collect team pennants. You know, the long triangle things that had the team's name and logo. Here's an internet picture of some from the 1980s: 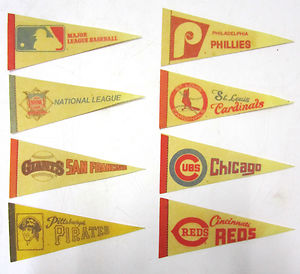 But I didn't just collect them and display them on my bedroom walls. I was truly geeky and instead I displayed them in rows hanging from my bedroom ceiling. And they weren't just any rows. They were rows organized by division. When I was being particularly industrious, I even moved the pennants around based on the standings. Yup, that was my childhood.

Anyway, in 1980 after the Phillies won the World Series, I acquired the above pictured pennant. From my collection, this is the only one that remains. It has traveled with me everywhere I have lived. A quick count indicates that means this pennant has made, counting conservatively, 18 different trips from one residence to another. It now hangs proudly on a wall in my closet. Well, maybe that's not as proudly as I used to display it before I had a grown-up house with grown-up decor, but it remains one of my most prized possessions.

The problem is, at this point, it's incomplete by itself. Until October 29, 2008, hanging there by itself, that pennant was the complete record of Phillies World Series victories. But ever since game 5B, the pennant is missing a partner.

I don't want just any partner though. I would absolutely love to find a pennant that resembles this one in content - one that declares that the 2008 Phillies were the World Series champions while also displaying the roster of the team that year.

I've searched many times but have been unable to find such a creature. I've found a couple of 2008 pennants, but neither is what I want. This first one is wholly insufficient since it's just a World Series pennant, with no winner.

This second one is better, as it has the Phillies as champions, but it doesn't have the roster.

So I'm asking for your help. There's no baseball today, so please, help me find somewhere in this great land of baseball and the interwebs a suitable partner for this 1980 classic.

For anyone who helps me acquire this, you will earn nothing short of my undying devotion.