Cole Hamels turns in another subpar start against his least favorite opponent, and the Phillies slip back to .500.

Share All sharing options for: Almost Means Nothing: Mets 5, Phillies 4

If you're a believer in history and regression, you probably weren't surprised at how things unfolded in Queens on Saturday afternoon. The Phillies were coming off a 13-run outburst in their Friday night win over the Mets, and hit better with runners in scoring position (7 for 10) than they pretty much ever do. Then you had Cole Hamels, pitching in the afternoon (when his career ERA is 68 points higher) against the Mets (against whom he entered with a lifetime 6-11 record and 4.28 ERA).

None of which made the game any less annoying to watch, as the Phils fell back to .500 with just their fifth loss in their last 15 games. Jimmy Rollins greeted Mets rookie pitcher Zack Wheeler with a home run to lead off the game--his first in 161 at-bats--but Hamels immediately gave up three in the bottom of the first on three hits and two walks, requiring 33 pitches to finish the inning on yet another scorching hot afternoon. Though the Phillies pressured Wheeler in every inning, drove him from the game one out shy of qualifying for the win, and came thisclose with a rally in the ninth, they never caught up.

After that great performing with runners on base last night, the Phillies couldn't land the big blow against Wheeler. They stranded two men each in the second and third innings, and only got one run from a bases-loaded, no out situation in the fifth. Chase Utley drove in one run with a sac fly to cut the lead to 3-2, but Domonic Brown flied out on a 3-0 pitch. When Wheeler walked Darin Ruf to re-load the bases, Mets skipper Terry Collins lifted his rookie flamethrower for reliever Gonzalez German to face Delmon Young, who'd already singled twice off Wheeler. Delmon promptly struck out to end the threat. Hamels then gave the run right back, as Eric Young, Jr. singled, stole second, moved to third on a Daniel Murphy flyout and scored on David Wright's single. He left after five innings with the Phils trailing 4-2.

The Mets added their fifth run on a Murphy RBI single in the 7th, and there it stayed until the ninth. Mets closer Bobby Parnell quickly recorded the first two outs, but Michael Young reached on an error and Utley followed with his second homer in as many days to draw the Phillies within 5-4. Brown doubled to the gap, bringing up Ruf as the tying run. The rookie hit it square, but lined out to second to end it.

Fangraph of I'm Really Glad I Went Last Night Instead: 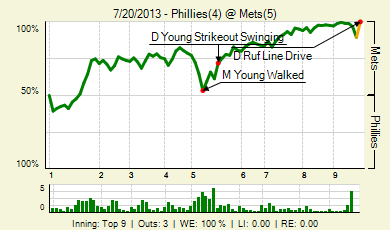