Cliff Lee fell victim to the longball once again as the Phillies fell back under the .500 mark

Share All sharing options for: Game of Inches: Mets 5, Phillies 0

Over their long history, the Phillies have had a few pitchers whose overall excellence was tarnished a bit by their propensity to surrender the home run. Robin Roberts, their Hall of Fame ace of the 1950s, led the league in homers allowed five times in seven seasons between 1954 and 1960, and held the career record of 505 home runs allowed for more than forty years. It was eventually broken by Jamie Moyer in 2010, during the last of the five seasons he spent with the Phillies. Of course, you only get to approach a record like that by pitching well enough for long enough to face guys who can take you deep, and Roberts and Moyer won a combined 555 games in their careers.

In addition to conspicuous success, Cliff Lee resembles both former Phillies hurlers in that he's always around the strike zone, and that this tendency renders him similarly vulnerable to the home run. Lee lost his last start before the break to the Nationals, who twice went back-to-back against him in seven innings of work. In Sunday's series finale against the Mets, Lee gave up back-to-back blasts again with two outs in the first inning, to David Wright and Marlon Byrd, and that was all New York ace Matt Harvey needed as he fired seven shutout innings at the Phils in an easy Mets win.

There's not much else to relate by way of game highlights. Chase Utley reached base via a hit-by-pitch in the first and ended any potential no-hit drama with a one-out single in the fourth. The Phillies came semi-close to scoring in the seventh, when Delmon Young doubled with one out and moved to third on a groundout. But Mets centerfielder Juan Lagares ran down John Mayberry's liner to the gap to end the threat. Harvey was dominant, sitting in the high 90s with his fastball while mixing in the occasional evil slider--at around 92-93--and putaway change-up. He struck out 10 without walking a batter. Domonic Brown was a victim three times, and fanned once more against Scott Atchison in the ninth to earn a golden sombrero.

Lagares also foreclosed any remaining doubt as to the game outcome with New York's third homer against Lee, a three-run shot with two outs in the fourth. The Lagares homer, like Wright's, required an umpire review to confirm, and neither would have left the yard before the Citi Field fences came in a couple years back. The rookie entered today's game with a .648 career OPS, buoyed by a 1.237 mark against the Phillies. Both numbers are now significantly higher. Early returns suggest he might well join the long and ugly line of Mets who suck overall, but somehow bedevil the Phillies. (Rey Ordonez, who had something like a quarter of his career extra-base hits against the Phils, leads this appalling group.)

My fear with Lee is that a slip in his trademark command without a corresponding change in approach will render starts like these last two more and more common. Probably no pitcher over the last five years or so has thrown a higher percentage of quality strikes--pitches over the plate, but difficult to square up. Differences of a fraction of an inch, a few times a game, might be enough to render him less an all-star than, well, a latter day Moyer with a better fastball. It's probably not enough to justify trading him, but with Lee's 35th birthday just a couple weeks off, it's one more thing for the Phillies to worry about as they face an uncertain future.

Fangraph of At Least It Was Kind of a Quick Awful Game: 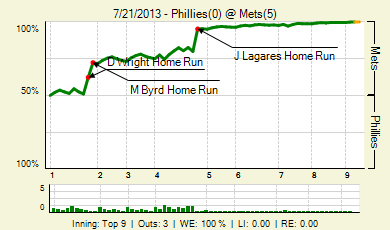