Evidently, there was something funny in the Philadelphia water in the late 70s. 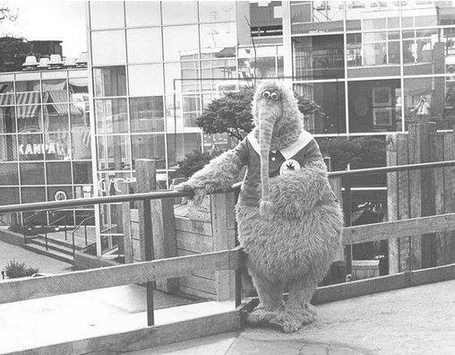 You're probably asking yourself - what the hell is that? Or maybe - what happened to the Phanatic? Well, thanks to the wonderful folks at Old Images of Philadelphia, we have this incredible photo of The Great Zookeeni.

Well, I don't know about you, but Big Bird and Mr. Snuffleupagus (the official name and spelling from the Sesame Street website, which for some reason the Observer-Reporter didn't have access to in August 1979) are not the first things that come to mind for me. In fact, my mind, along with many of the commenters on the Old Images Facebook page and my former student who posted the picture and suggested this post title (thanks Steve!), went immediately to the Phanatic.

How could it not? This is less than a year and a half after the Phillies introduced the Phanatic to the world (April 1978), and now we have the Zoo introducing another furry creature to Philadelphians. It must have been capitalizing on the success of the Phanatic.

As a lifelong Philadelphian, this fascinates me, as I've never seen or heard of The Great Zookeeni before. But maybe you have. So, for all of you out there who may have, I have three questions:

1) What happened to him? A Google search reveals very little about this mystery mascot.

2) Does anyone have a color picture of the Great Zookeeni? It would be spectacular to see.

3) Someone must have the costume. How do we get the Great Zookeeni at the Vet with the Phanatic at a Phillies game . . . and soon!