Phillies better than one would have thought with men on 3rd and less than two outs. The Braves come in with some of the best hitting in the NL. And some of the best pitching, having given up the fewest runs in the league. 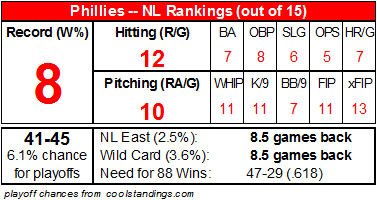 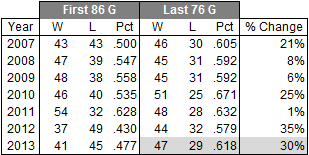 - Phillies Hitters vs. Projections
- Phillies Team Stats vs. 2012 and vs. the Braves
- NL Standings and team stats
- Upcoming Milestones 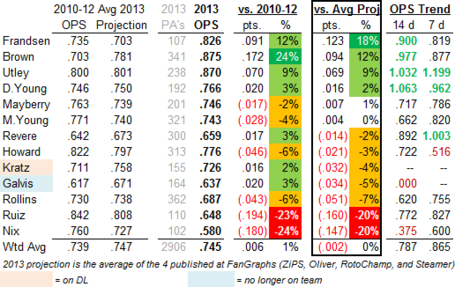 Ben Revere: If he can hit somewhere close to his numbers since May 1st, and minimize (or outrun) his bad routes in Center, Revere could be a useful player:

Phillies Team Stats vs. 2012 and vs. the Braves

Man on 3rd, less than two out: It's been pointed out before that the Phillies are doing surprisingly well (given some frustrating failures) in getting home the runner from 3rd with less than two out, and they still rank 3rd there. There are 108 players in the NL with at least 10 opportunities in those situations. Out of those 108, here is where the Phillies rank (NL average is 49%):

Braves: The Braves have been among the best-hitting teams in the NL. Not surprisingly, they have the most home runs and the most strikeouts, but they also have the most walks. Similar to a pattern the Phillies have followed in recent years, they are very good at getting into hitters' counts (#1), but then have used those counts to look for pitches to drive (12th in taking pitches in those counts). 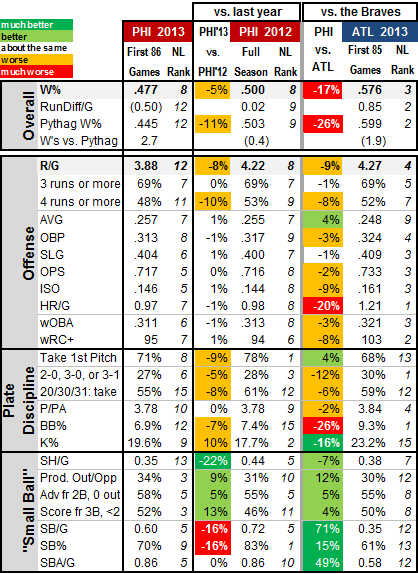 Braves: The Braves have allowed the fewest runs in the NL, and their bullpen in particular has been shutting down late innings in typically stellar fashion. 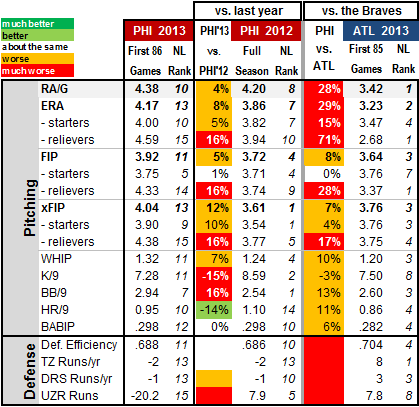 Miami has the best record in the NL since June 1st (tied with Pittsburgh) -- both have won 18 of their last 29. 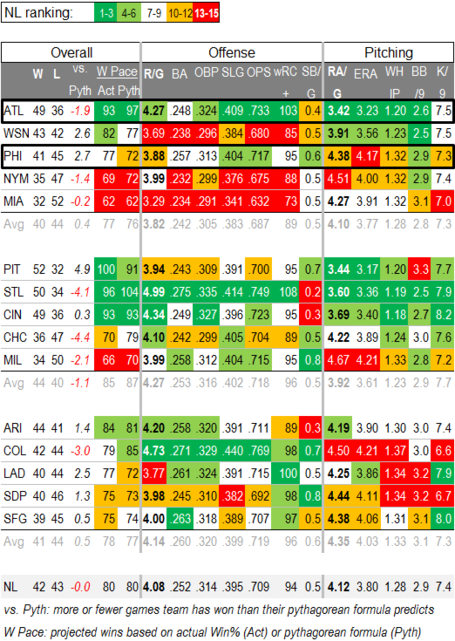 Jimmy Rollins
- Rollins reached two milestones during the Pirates series that he won't be celebrating. First, on Tuesday he struck out for the 1,000th time in his career, becoming the 7th Phillie to do so. Rollins is also 7th in Phils history in walks, with 660.
- In addition, his caught stealing in the first inning yesterday was the 89th of his career, tying him with Tony Taylor for 3rd most in Phillies history (i.e. since 1951, when MLB began tracking the CS stat).
- Rollins' next steal (9th) will pass Ed Delahanty for 2nd most in Phillies history.
- He needs 3 more doubles (21 total) to tie Delahanty as the Phillies' all-time leader, with 442.
- Six more RBIs (34 this year) will tie Pat Burrell for 8th most in Phils history at 827.
- He also needs 3 more home runs to reach 200 for his career, becoming the 10th Phillie to do so. That will make Rollins just the 9th player (and only shortstop) in MLB history to have 2,000 hits, 400 stolen bases, and 200 home runs.

Chase Utley
- His two extra base hits yesterday gave him 534 for his career, and tied him with Johnny Callison for 9th most in Phils history.
- Two more doubles (14 this year) will tie Richie Ashburn for 8th most, with 287.
- Utley's next HBP (3rd this year) will tie Brady Anderson for 19th all-time, at 154.