Share All sharing options for: Now and Later: Phillies 7, Braves 3

Whether or not the front office has tumbled to the reality yet, the Phillies are pretty clearly embarked upon a moment of transition. Even if they come up big through Ruben Amaro's Ten Games of Destiny (tm) and beyond, and wind up keeping the gang together in the far-fetched hope that Ryan Howard and Roy Halladay come riding over the hill, shoulders and knees intact and ready to party like it's 2009, this would be the end of the line. But at three games under .500 and 7.5 back in the division, it remains at least as likely that some big names will be leaving town before the month is up. If and when that happens, the goal will change from maximizing wins in 2013 to putting a foundation in place for renewed contention next season and beyond.

Considered in this light, Sunday’s three-plus hour contest in you-must-be-kidding heat and humidity featured significant goodness on both sides of the ball. Domonic Brown celebrated his selection to the all-star team with an RBI triple and home run number 23 on the season, and Ben Revere continued to edge toward the .300 mark with a two-run triple of his own, all against Braves starter Kris Medlen. Darin Ruf made his first start of the season and chipped in a double and a walk, scoring twice. In all, the Phils scored six of their seven runs with two outs. Rookie starting pitcher Jonathan Pettibone was razor sharp early and finished with six strikeouts, lowering his ERA to 3.84. When Pettibone began to physically melt in the sixth inning, relievers Jake Diekman and Justin DeFratus came on to extricate him from a two-on, one-out jam and preserve what was then a 5-1 lead.

Of course, when you’re asking the Phillies bullpen to register 11 outs, you know there’s going to be some uneasy moments. Trailing 7-1 after a wild pitch from reliever Alex Wood allowed two runs to score, the Braves got two back against J.C. Ramirez in the seventh on a Chris Johnson homer and an RBI single from Jason Heyward. Antonio Bastardo relieved Ramirez with two outs and two on, and escaped further damage by striking out Freddie Freeman. Bastardo stayed on through the eighth, working around a single and a walk to keep the lead at 7-3. Jonathan Papelbon pitched a non-save scoreless ninth inning, using 25 pitches to give the Phils a series win.

Fangraph of It’s Always Nice to Beat the F*#!ing Braves: 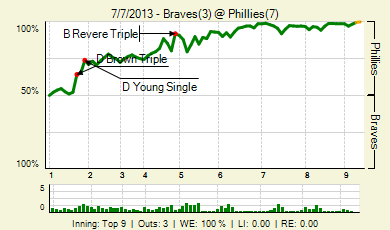