Who Would Buy That? Nanook of the Phillies Edition

These boots would make better kindling than actual foot coverings.

Share All sharing options for: Who Would Buy That? Nanook of the Phillies Edition

Summer, beautiful summer. I love summer. It's by far my favorite season. Baseball, mojitos, the beach, and tons of daylight. So why would I want to think about winter? Behold, these hideous boots. 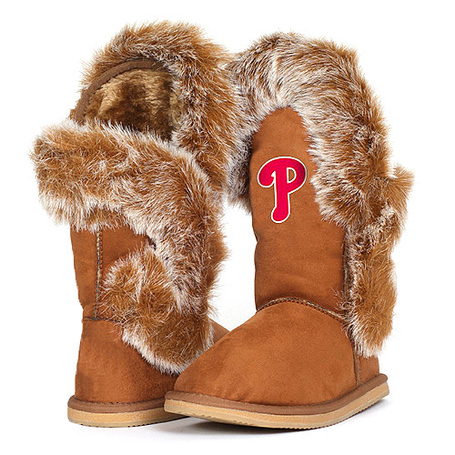 Those boots are a product that someone made. Someone somewhere thought these would be a good item to manufacture. And then someone in MLB merchandising saw them and thought "YES! Those are EXACTLY the type of thing we should be selling." Completely ugly, wholly impractical, barely functional decorative winter wear.

I mean, look at them! No, don't look away! I see you looking away in disgust! Look upon the boots in all their terrible glory! This is what would happen if a pair of off-brand Ugg boots and a faux fur hat had sex. These boots are the demon child of that unholy union.

The description is straightforward and makes no claims as to their functionality in winter weather. The outside of the boot is polyester microfiber, accented with a longhair faux fur. It looks like the boot got hungry and lured an unsuspecting animal into its depths, and the indigestible fur is seeping out of all the boots' orifices. The inside of the boot is lined with a thicker, more matted faux fur. The sole is textured rubber. You'll notice the absence of words like "leather", "felt", and "waterproof", key words you usually see when buying boots that protect the wearer from rain and snow. (Or dirt, or gravel, or just the ground in general.) And you can't forget the team insignia, helpfully placed on the front upper of the boot. Because if you can't show your team affiliation on every single thing you put on your body, what's the point of supporting a team at all?

While the boots make no claim to seaworthiness, their look tries to convince the unassuming shopper otherwise. They *look* like winter boots. They have fur lining the outside. They have fur lining the inside. The sole is rubber. They look like boots that people wear in the winter. Fur lined boots seem wintry, in a vague "Little House on the Prairie-I've-killed-an-otter-and-now-it's-lining-my-homemade-boots" kind of way. But of course, something you learn from those books (and from the Jimmy Spoon books, and from Island of the Blue Dolphins, and Sign of the Beaver) is that otter pelts are waterproof. Polyester faux fur is, well, not.

But would anyone actually buy these boots thinking they're ready for winter weather? Or, as the premise of this recurring feature states, would *anyone* buy these at all? And who? The poor, misguided new girlfriend of a baseball fan/adventurer. She just wanted to impress him. They're staying at a cabin in beautiful, snowy Vermont. It's going to be late March, after all! Hardly any snow left! At least, that's the way it always is in Maryland. It couldn't be that different. He gave her a list of things to get for their trip, and when she saw those fur lined beauties in the clearance section of the mlb.com shop, she checked off "boots" with a satisfied smile. A rubber sole AND his favorite team's insignia! She was smart AND thoughtful! This will be the best weekend ever. When he asked to look over her gear, she assured him that she had everything on the list. He nodded and let it go -- no sense in aggravating her before their romantic weekend. Besides, she couldn't screw any of this up THAT badly.

Of course, he was wrong. He saw those hideous, fur vomit boots as they left for Vermont, and complimented her on them despite the fact that they were retina-searingly ugly and entirely impractical. It wasn't until they were suiting up for their sunrise hike the next day that he realized that those were the only boots she brought. SHE couldn't believe there was still so much snow. "I thought most of the snow would be melted by now! It's March!" "It's Vermont!" he said, incredulous. "And we're in the mountains! There's snow here practically all year round!" She shrieked "HOW WAS I SUPPOSED TO KNOW!" and refused to put on his extra pair of boots or call off the hike. A half a mile from the cabin, she started whimpering about her cold feet. When they hit a mile, she was full out whining about how her socks were wet. They hadn't even hit two miles before she refused to walk any farther. He couldn't see the glorious sunrise because he was carrying his idiot girlfriend on his back just so she'd shut the hell up. They left as soon as they got back to the cabin. During the ride back, she wouldn't stop yelling at him about letting her come unprepared, and he refused to apologize for her lack of simple logic. Their breakup was unceremonious -- she said his "macho love of hiking was clearly compensating for something", he called her "the stupidest person I've ever met in my life." She demanded to be let out of the car, and he happily obliged -- five miles from a rest stop on scenic Route 15 in Connecticut.