Roy Halladay returns from the DL, and batters everywhere shiver in fear.

The signs and augurs weren't very promising for Roy Halladay's surprise return Sunday. Through two rehab starts in the low minors, the one-time Ace of Aces had shown middling velocity and location, and the combined results and reports gave the impression of a pitcher not all that different from the guy who'd posted an ERA over eight in a handful of early-season starts. That Halladay was pressed into service with the Phillies on Sunday, rather than up the road in Reading, only because planned starter Tyler Cloyd pitched five innings of surprise relief in Saturday's bizarre 18 inning loss wasn't grounds for confidence. Nor, on the other side, was the fact the Diamondbacks would send to the hill Patrick Corbin, a second-year lefty likely to earn some down-ballot Cy Young Award votes.

Doc worked through some early hiccups, giving up a run in the first after a leadoff triple from Tony Campana, another in the second on a deep sac fly from former Phils organizational soldier Tuffy Gosewich, and a blast to dead center from Matt Davidson that Roger Bernadina pulled back from over the wall to end the third. Overall, though, he performed beyond any reasonable expectation, setting the Diamondbacks down in order through the fourth and fifth and ultimately finishing six innings on 94 pitches, surrendering just the two early runs on four hits and two walks while striking out two.

Halladay's fastball sat in the high 80s with movement, and he leaned heavily on a sharp curveball and changeup that he mostly located where he wanted it. Gone were the egregious misses in the zone that batters could blast like a ball off a tee; when he missed, it was close, and he was endearingly pissed about it. If he didn't much resemble the dominant starter of 2010-11, Sunday's performance against a solid opposing lineup offered every hope that the new Doc can emerge as a superior #3 starter going forward.

Meanwhile, a Phillies lineup featuring Bernadina leading off and Erik Kratz batting cleanup enjoyed surprising success against Corbin, plating four runs in the bottom of the first to give Halladay a lead he'd protect. Cody Asche delivered the big blow with a two-run double off the lefty. In the fourth, John Mayberry stretched the lead to 6-2 with his 10th home run of the season, and two innings later the Phils put it out of reach with three more runs on a Chase Utley pinch-hit RBI single and a two run Bernadina double.

With the win, the Phils finish the homestand 6-4 and claim consecutive series victories for the first time in the second half. For those who care about such things, they also move a percentage point ahead of the Mets into third place in the NL East. Don't buy, Rube. Please. 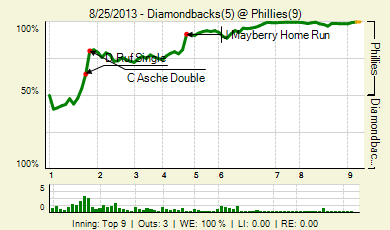