Phillies and milestones -- an update

When will Jimmy Rollins become the Phillies' all-time hits leader? How about at bats? plate appearances? Additional milestones for Chase Utley and several others.

Share All sharing options for: Phillies and milestones -- an update

This is to recap the milestones that Phillies have reached so far this season, and look ahead at what's next. 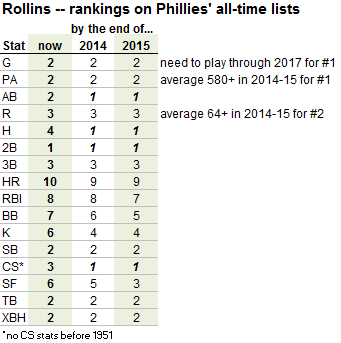 By the way, Papelbon is 32, and the list of highest save totals through the age 32 season is quite the mixed bag:

- Michael Young drove in his 1,000th run
- Roy Halladay won his 200th game
- Cliff Lee reached 2,000 career innings
- Charlie Manuel passed Gene Mauch for the most games managed for the Phillies, and of course, won his 1,000th game as a major league manager