On Cole Hamels, Third-Place Late August Baseball, and the Cult of Ethereality

Share All sharing options for: A Sweet Dream, Forgotten by Breakfast: Phillies 6, Mets 2

On a day in which we paused to reflect on great dreams, consider for a moment that most of our dreams are fleeting, and are forever locked in our subconscious gymnasia before we task our toothbrush to invade our stanky, humid and encrusted orifices. Others of us go so far as to brush our teeth as well. The point is, by the time we're ready to face the new day, no amount of head-rattling remembering can get us to make sense of what seemed so godawful important five minutes before the alarm woke us.

And so it was that last night in Queens, the Phillies played the New York Mets in a no-holds-barred, zip guns at dawn rumble under the number 7 trestle kind of throwdown for third place in the National League East. Well, no, not really. That's the kind of embellishment to a dream you try out to lend narrative coherence and a knowing hipness of 1950, teens-gone-wild pulp fiction and comic books that occupied the dull Saturdays of a used bookstore adolescence to impress-distance your co-workers. The reality was far snoozier, with lame-brained lineups of contingencies betraying organizations comprised of frayed tendons in front of fans out for fresh air and conversation before summer nights turn chilly and these sorts of game get really pointless.

Regardless: the Phillies won behind the dreamiest dreamboat who ever sailed to the mound, Cole Hamels. And a fine thing it was, too, as Hamels pitched seven innings, allowed two runs, struck out eight and walked one en route to his sixth win of the season, and the team's 61st, good enough for a one-handed, one-game grip on third place and a shot to win another series in the New Rah-Rah Ryne Sandberg Era of Phillies baseball.

To ensure he didn't lose his 14th game of the season as a result of paltry run support and an outfield that comprised boomeranging Canadian Pete Orr in left, Roger Bernadina in center, and John Mayberry, Jr. in right, Hamels even added a bases-loaded RBI single with two outs in the fifth inning off of Mets reliever Robert Carson to stretch his team's lead to 4-1. Here is a dreamscape'd, rough visual representation of what this all looked like as Hamels walked off the mound prior to the seventh inning stretch: 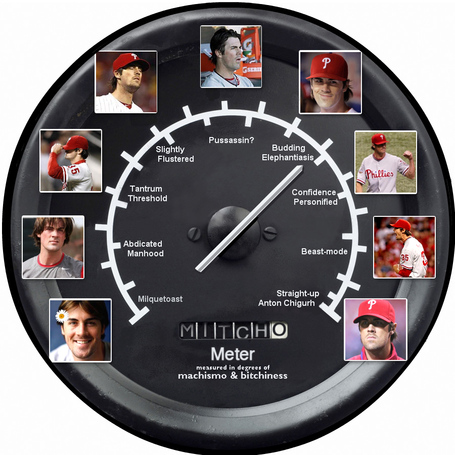 What remains of our dreams, once stripped of our pretensions and we own up, likely in therapy, are just the imagistic remnants of what seems, at first glance, to be utterly random. We might remember the odd person we haven't seen in a long time reappearing, or maybe another person, or a composite, who has some odd characteristic, like not being able to speak English. And yet we remember having this deep conversation with him anyway. And it seemed, to, like, go on forever, you know? And it was so deep!

Inhabiting that role last night was Daisuke Matsuzaka, in his second start for the Mets, effective only in that he stretched the evening like so many melting pocketwatches hanging on a branch, threw many pitches, and gave up four runs in 4.1 innings. He was much worse than that, however, because the Phillies squandered many a scoring opportunity in the early innings before Mets manager Terry Collins pulled him after Dice-K hit Mayberry with the bases loaded. You could hardly blame him. 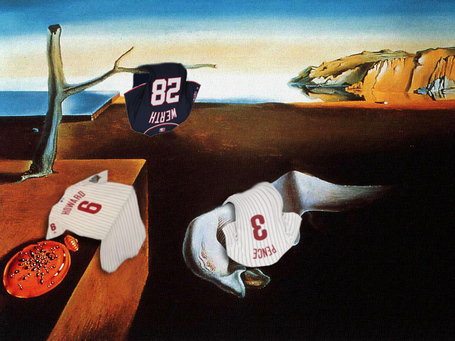 Perhaps an odd nightmarish bit, one that feels like it robs you of your future, a feeling of impending doom? That part was when worth-tuning-in-for-a-looksee-kinda-sorta Cody Asche left the game after pulling his hamstring after a hit (of course) to lead off the seventh. Let's hope it's not the last time we see him this season, although postgame reports were optimistic:

Then there was the wacky predicament part, when Eric Young tagged and went to third on an infield popup that went to Carlos Ruiz. Don't bother looking for that one on MLB highlights. It really looked like this:

Then it ended so quickly, with Jake Diekman and B.J. Rosenberg pitching consecutive 1-2-3 innings in the 8th and 9th, that it all drifted away so effortlessly, leaving us all vaguely and turgidly hopeful for a new day, with 61 wins and a vague sense of progress, until someone pops the bubble and points out the grand illusion.

Ah, but lest we forget the Bard:

We are such stuffAs dreams are made on; and our little lifeIs rounded with a sleep.

Back to dreamland. Daydreams tomorrow. I'll get you started:

And a Fangraph of REM sleep: