Tanks for the Memories: Braves 4, Phillies 1

Another dismal night at Citizens Bank Park, as the Phillies fell yet again to a Braves team that looks poised to put it to them for years to come.

Share All sharing options for: Tanks for the Memories: Braves 4, Phillies 1

Had things unfolded differently last week, Cliff Lee might have taken the mound today for the AL East leading Red Sox today, as they shut out Arizona to improve to 68-45 on the year . Or maybe the Cardinals, who crushed the Reds 15-2 to stay 1.5 behind the Pirates in the NL Central. Or--who knows--the Dodgers, who've won something like 15 of their last 12 to race out to a big lead in the NL West.

But Lee--like every other Phillies player--stayed put as the trade deadline came and went, and made his return after missing a couple starts against the Braves on Sunday night. And once again, he couldn't quite throw the knockout punch: with two out and two on in the first inning, Lee got ahead of Chris Johnson 1-2 before surrendering a two-run single. In the fourth, with two outs and an 0-2 count on Jason Heyward, Lee again gave up a run-scoring hit, then another to Justin Upton. That was more than enough as the Phillies lost their 13th game in 14 tries, their worst sustained stretch since a 1-18 skid late in the 1999 season.

As for offense, there was pretty much none to speak of. Carlos Ruiz doubled in the third inning, moved to third on a sacrifice and scored on a groundout. There were three other hits, all singles; Darin Ruf had two, if that makes you feel a little better. Delmon Young came to the plate four times, and walked back to the dugout after striking out four times. Braves rookie starter Alex Wood earned his second career victory, and it's a good bet he won't have many easier.

Sunday's game was a depressingly apt conclusion to an Alumni Weekend featuring the Phillies past and the Braves' future. As John Kruk reminisced in the ESPN booth about the mighty offense that he helped lead in 1993, the current lineup featured just one hitter, Ruf, with an on-base percentage higher than the team OBP of .351 that season. Sunday night's lineup featured no players younger than 27, and five age 34 or older. Meanwhile, the Braves team that has utterly buried them employs 12 players 25 or under, and their Sunday lineup featured eight of nine starters under 30. That the Phillies' payroll is about $80 million more than Atlanta's is just more salt in the wound.

Fangraph of This is Really Freaking Depressing: 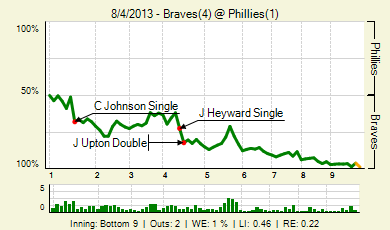