Leave the Lights On - Phillies 9, Cubs 8

After the previous two weeks' offensive futility, the Phillies pounded out nine runs en route to a convincing victory over the Cubs.

Share All sharing options for: Leave the Lights On - Phillies 9, Cubs 8

But then Jonathan Papelbon was introduced.

Papelbon, who infamously said about the Phillies' losing streak that he, "definitely didn't sign up for this [shit]," has become something of an absurd embarrassment for the already sufficiently-embarrassed Phillies.

Let's jump back a bit, first, though. After Chase Utley drove in Michael Young for the game's first run, Kyle Kendrick unraveled in the second. Erstwhile Phillie Nate Schierholtz (FYI, Schierholtz autocorrects to "schoolteacher") led off with a double to right fielder Darin Ruf (yes, this happened), reaching third on a sac fly to right fielder Darin Ruf (not known for his cannon arm), and scoring on a fielder's choice misplayed by Cody Asche. After Darwin Barney reached on catcher's interference, Donnie Murphy strode up and blasted a three-run homerun to left.

The Cubs struck again in the third, however, on a solo homerun by Wunderkind Anthony Rizzo, but after that, Kendrick settled down and the bullpen held the line until the ninth.

The Phillies got one back in the bottom of the second, as Asche lined a double to right (his first real career hit), before being driven in by Kendrick; and two more in the third, after singles by Utley and Rollins, a solid double by Ruf (yes, Victoria, he can hit rightie--he just can't run too fast), pushing the score to 5-4, just one run behind.

In the fifth, though, things got fun. After Michael Young led off with a walk, Utley followed with a triple (you could tell he wanted to stretch it all the way), and scored on another RBI groundout from Brown.

The Phils scored single runs in the sixth (Asche and Young) and eighth (a solo homerun by Carlos Ruiz) to push the score to 9-5. A veritable smorgasbord of offensive eruptitude. I mean, nine whole runs. Today was, incidentally, only the fourth time they've tallied nine runs or more in a single game.

Right. That guy. Papelbon gives up a leadoff single to Logan Watkins (who?), followed by a double to David DeJesus (who?). With runners on second and third, he struck out Junior Lake (who?) swinging and Rizzo looking, before allowing a two-run single by Schierholtz. 9-7.

Starlin Castro flied to left, but Brown couldn't make the catch (perhaps he didn't sign up for this shit either), scoring Schierholtz. 9-8.

So, take a second to examine this. Here you have a Phillies squad that is in the midst of (by recent standards) a woefully bad year. Yet, they have a luxury component in their relief ace. Papelbon is, or was prior to being signed, arguably one of the top three closers in baseball today, and could be a nice, if overpriced, addition to a perennial pennant winner. The 2013 Phillies, however, are not a pennant winner. They're going to be lucky to finish at .500. Yet Papelbon is still here, so in the relatively few save opportunities he's going to get, we should expect him to capitalize, right?

WRONG! See, HE DIDN'T SIGN UP FOR THIS SHIT! AND BY GOD, HE'S NOT GOING TO LET US FORGET IT! Hence his new nickname: Lights On Papelbon. Little wonder he's being booed, then. But unlike phormer phrequent Philly boobird targets (Abreu or Schmidt, say), Papelbon has stepped right into it, like a freight train colliding with another freight train onboard an oil tanker getting blasted into the Grand Canyon by a comet on it's way into the sun.

So two outs in the ninth. One-run game. No runners on, thankfully. Time to knuckle down and end this nonsense. And Papelbon walks The Duke of Wellington (who?). Thankfully, he got Thomas Neal (who?) to fly out, mercifully ending the game.

Side note: for all the badness the Phils are experiencing, doesn't it seem like the Cubs only have like two major league players? 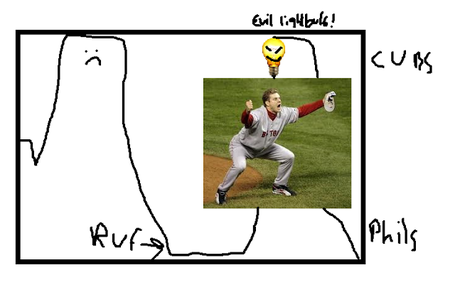 With the win, the Phillies "improve" to 51-61. Tomorrow Cole Hamels takes the mound against the reanimated corpse of Zombie Smokey Joe Wood. WHAT COULD POSSIBLY GO WRONG!!!!!!!