Old Images of Philadelphia is a great page on Facebook that you should like. Among its awesome old photos are many relating to the Phillies.

I wrote about Old Images of Philadelphia before when I wrote about the Bizarro Phanatic - the zoo mascot from the late 1970s that eerily resembles the Phanatic.

Today, amidst this agonizingly slowly dying season of Phillies baseball, I'm writing to encourage you to like the page on Facebook. The page regularly posts pictures of Philadelphia from various times throughout history. It features neighborhoods, landmarks, people, maps, and more. It's really fascinating to see the city through the ages.

But what's relevant to this site is that the page includes amidst what it posts photos of Phillies-related things. In the past day, it has posted three, which has inspired this post.

First, there's this great photo of Phil and Phyllis, the team mascots before the Phanatic. I've heard about them and seen reproductions of them at Storybook Land, but this picture is a great one of them on the field. 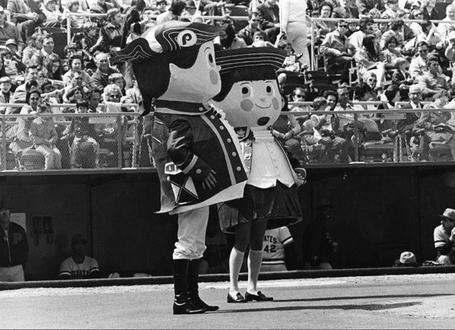 Second is this great picture of three people with tickets to Game 2 of the 1980 World Series. (I just love the odd but wonderful convention of capitalizing Game" in saying which game of a World Series you're talking about.) The tickets are great, but the 1980 look of the three fans is even better. 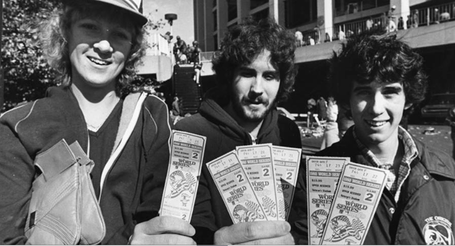 And finally, this shot of the probable rotation for the 1935 Phillies. Who are these fine fellas? None other than Sylvester Johnson, Curt Davis, Euel Moore, and Phil Collins. Free tickets for the rest of the season to those who figured that out from the picture alone. 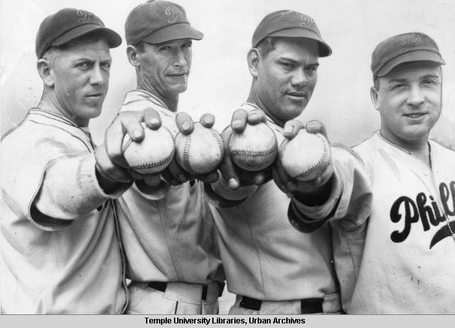