The Phillies still have a shot at a worst-10 record and a protected draft pick. In addition, interesting and enlightening facts about Jimmy Rollins, Carlos Ruiz, Mike Trout, and more.

At 69-80, the Phillies now have the 13th worst record in baseball, but finishing in the "top 10" is still very much within reach.

89 losses will almost certainly get it done, and they would have to lose 9 of their last 13 to get there.
88 losses may also be enough, meaning a 5-8 record the rest of the way will put them in the hunt, at least. 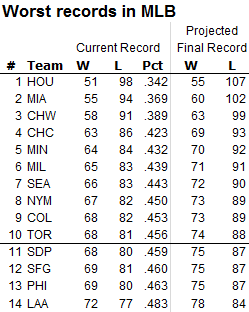 JWalk - Rollins and Bases on Balls

We would all like it better if Jimmy Rollins took more walks (and he's been walking more since Sandberg took over), but even if he didn't, it's good to keep in mind that if the Phillies didn't have Rollins in the lineup, they would have a different shortstop.  So it's useful to compare him with others at his own position.

"Yeah, but he pops up all the time, so we might as well count those as strikeouts, too."

Granted. Of the 39, how many have a better ratio of BBs to combined Ks and popups? 6

Chooch: Before and After

The change in his hitting numbers before and after August 1st continues to astonish:

Surprisingly, his line drive rate isn't very different, but he has replaced many of his grounders with fly balls:

Today is Martinez' 31st birthday (it's also Desi Relaford's, who turns 40 today and was Ruthian by comparison).

When we last visited MiniMart, he was on his way to a possibly historic season.  He had gone the entire season (34 PAs at that point), with a triple slash of three identical numbers, because he didn't have any extra base hits, walks, or sacrifice flies that would cause OBP and SLG to differ from batting average.  If the season had ended at that point, the 34 PAs were already enough to set the Phillies record for most PAs in such a season.

Since then, he's only had one more plate appearance, and kept his streak alive at 35. Only 12 players since 1900 have gone through a season with more PAs and identical BA/OBP/SLG, and only 1 in the last 26 years: 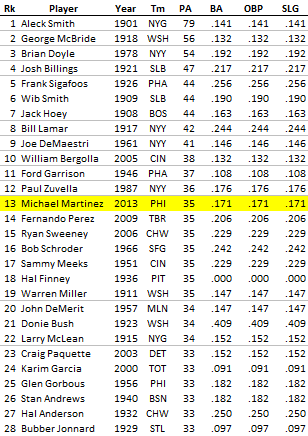 At the other end of the major league spectrum from Michael Martinez, there is Mike Trout.

Trout is 22, and he is off to a historically great start to his career. Most fWAR through a player's age 22 season:

Compared to other 21 year olds, he has already blown to the head of the pack. Most fWAR through age 21 season:

The baseball-reference.com lists by rWAR are similar.

What's the Phillies connection, other than that he's from the area?  He has a chance to lead the AL in both hits and walks this year -- he's leading in walks by a wide margin (100 to 85 for #2), and he is 3 hits off the pace for the AL lead (181 vs. 184 for Beltre, 183 Machado).  Leading one's league in both hits and walks has only been done 5 times in baseball history, and 3 of those have been by Phillies:

Jimmy Rollins- On Thursday Rollins stole his 20th base on the year, making him the 23rd player (and the 5th shortstop) in MLB history with at least 12 seasons of 20 or more steals.  He became the 3rd active player, joining Ichiro and Juan Pierre (both of whom have 13).
- He got his 199th home run last week, and with his next one he will become the 10th Phillie, and 8th shortstop, to hit 200. That will also make him just the 9th player (and only shortstop) in MLB history with 2,000 hits, 400 stolen bases, and 200 home runs.